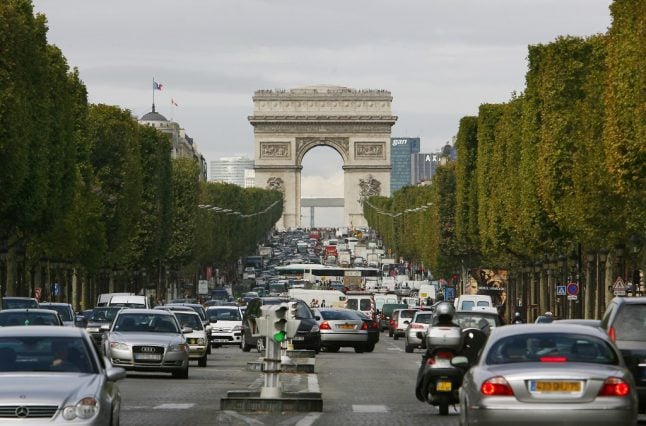 Photo: AFP
Most of France is baking under the sun this week, with national weather agency Météo France increasing the number of departments on alert for heatwaves to 65 on Tuesday afternoon. And to make life more difficult, a peak in pollution linked to the heat has hit the French capital.
According to predictions by Airparif, which monitors pollution in the capital, the threshold for ozone pollution (set at 180 micrograms per cubic meter) will be exceeded on Wednesday.
The pollution problem has prompted the Paris authorities, where temperatures are expected to reach 37C on Wednesday afternoon, to ban the most polluting vehicles from the French capital and the area immediately outside the city known as the “Petite Couronne”.
This means that for the first time vehicles carrying Crit'Air 3 stickers will not be allowed on the roads inside the A86 (see below). Only those with vehicles registered 0, 1 or 2, as well as people with electric vehicles, will be permitted to drive.
READ ALSO:
“You have to face reality, which is the increase in air pollution when there is a heat wave, like the one are experiencing at the moment,” France's Minister of Ecological Transition François de Rugy told the French press.
Paris is one of several cities – along with Lyon and Grenoble – that is using the Crit'Air system. The sticker scheme assigns a number from 1 to 5 to all vehicles, based on how polluting they are. Level 5 vehicles have already been banned from central Paris on weekdays and level 4 – which mostly covers older models of diesel cars – will be banned from Paris from July 1st.
More than one million vehicles registered in the greater Paris Ile-de-France region have a vehicle registered as Crit'Air 3 (out of five million registered vehicles carrying a sticker).
Meanwhile 410,000 registered vehicles carry a Crit'Air 4 or 5 stickers in the Paris region.
In addition to banning certain cars from the Paris region, city authorities also announced free residential parking on Tuesday and Wednesday to encourage motorists to leave their cars at home and use public transport or non-polluting transport. Photo: AFP
On top of that the speed limit will be reduced to 110 km/h on motorways in the region from 130 km/h while on roads where the speed limit is normally 110 km/h the speed limit will be reduced to 90 km/h.
Finally on roads where the speed limit is normally 80 or 90 km/h, drivers will be required to drive at 70 km/h.
One mayor in the region has made a demand that is as unusual as it is unlikely to be carried out.
The mayor of the town of Saint Prix in the Val-d'Oise department wants to ban nighttime flights at Charles de Gaulle airport so that people living in the area can get a good night's sleep with their windows open during the heatwave.
Writing to France's Health Minister Agnès Buzyn, the mayor said he wanted to “draw her attention to the health situation and the health risks of 300 000 inhabitants.”
French words to know
Traffic – la circulation
Electric car – un véhicule électrique
Pollution spike – un pic de pollution
Speed – la vitesse