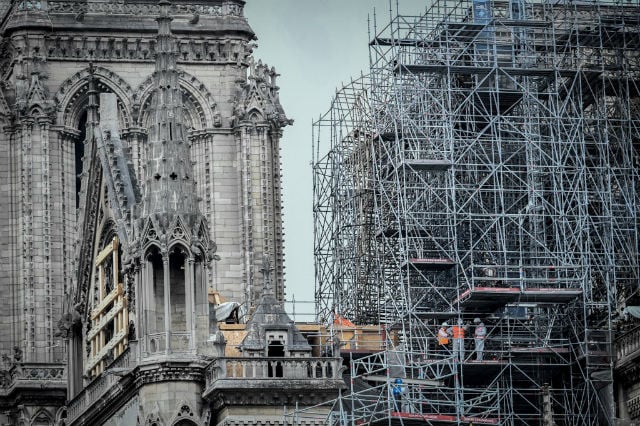 The 850-year-old church's spire was clad in scaffolding when it came crashing during the blaze. Photo: AFP
The 850-year-old church's spire was clad in scaffolding when it came crashing during the huge blaze on April 15.
The cathedral's roof was also destroyed in the inferno, although the vast majority of the most-sacred artefacts and valuable items inside were saved.
Shortly after the fire, French President Emmanuel Macron pledged to complete a painstaking renovation of the gothic masterpiece within five years.
But that cannot begin until “essential” work takes place to secure the structure, the Notre-Dame Foundation charity said in a statement.
“One of the most complex aspects of the work at the moment is removing the scaffolding, which includes 50,000 tubes which reached over 800 degrees Celcius (1472 degrees Fahrenheit)” during the fire, charity head Christophe-Charles Rousselot told AFP.
“A similar structure will be installed, as well as cranes, in order to start cutting down (the scaffolding) in very delicate conditions,” the charity statement said.
Dismantling the scaffolding is expected to take four months, Rousselot said.
Notre-Dame hosted its first mass after the inferno earlier this month, with priests and worshippers donning hard hats to protect themselves against possible falling debris.
Wealthy donors have handed over millions of euros to restore the church, including French luxury goods rivals Bernard Arnault and Francois-Henri Pinault, who have pledged 200 and 100 million euros ($228 million and $114 million) respectively.
The full amount needed to restore the cathedral is not yet known, the Notre-Dame Foundation said.