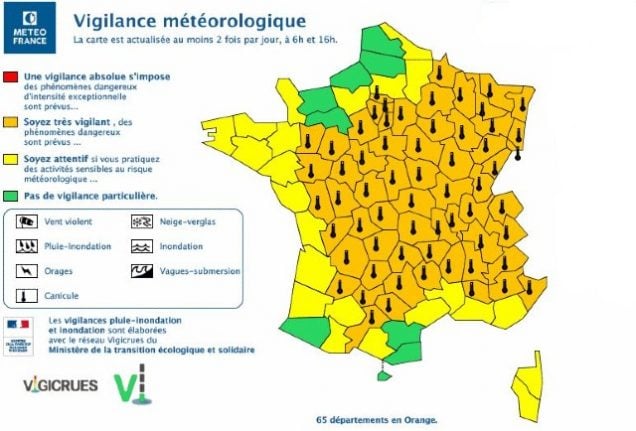 French weather forecaster Météo France has issued orange alerts – the second highest warning – for 65 départements in France, leaving a warning map that now covers the majority of the country.

Some 53 departments were already on alert on Monday as the Mercury began to rise.

The warnings began in Paris and the surrounding areas before spreading south and east.

Both Paris and Dordogne have activated emergency plans to deal with the heat.

It is thought that temperatures during the heatwave – which is forecast to go on all week and reach its peak on Thursday and Friday – will spike at 40C, but forecasters have warned that accompanying high humidity will make the temperatures equivalent to 47C, particularly in cities.

Health warnings have been issued for the elderly and young children, and the predicted temperatures are being compared to the heatwave of 2003, when unusually high temperatures in August caused 15,000 deaths across France.

Meteorologist Guillaume Séchet told Le Parisien: “The mercury will already reach incredible temperatures but with the humidity level in the air, the feeling will be terrible.

“While we will have almost 40C in Paris, the atmosphere will be so heavy that we will feel the heat as if it were 47C.”

From Monday morning, the Ministry of Health will be broadcasting warnings on TV and radio urging people to stay hydrated, avoid getting overheated and check on elderly or isolated neighbours.

READ ALSO Where are the hottest (and coolest) places in France this week?

Health minister Agnès Buzyn added that hospitals and ambulances are on standby to deal with an expected spike in calls.

She said: “I'm worried about people who are downplaying this, who are continuing to exercise as usual or stay out in the sun.

“This affects all of us, nobody is a superman when it comes to dealing with the extreme heat we're going to see on Thursday and Friday,” she told a press conference.

“It's unprecedented because it's hitting so early in June, we haven't seen this since 1947,” said Emmanuel Demael, a forecaster at the Meteo-France weather agency.

He expects records will be set for the month, “and in some places records for all months combined.”

Meanwhile there was some good news for school pupils – the French government announced on Monday that it was taking the unusual step of delaying national school exams scheduled for this week to protect pupils during a heatwave.

Education Minister Jean-Michel Blanquer said the Brevet national diploma exam – a key test for children aged around 14 that was set for Thursday and Friday – would be delayed until next week.

The orange alert issued by Météo France is for a danger to health posed by the heat. The risk is listed as affecting everyone, although children and the elderly are at particular risk, along with athletes and people who do physical work.

The forecaster lists the following behavioural advice;
* In case of discomfort or behavioural problems, call a doctor.
* If you need help call your local town hall.
* If you have elderly, chronically ill or isolated people in your life, check in with them or visit them twice a day. Accompany them in a cool place.
* During the day, close shutters, curtains and windows. Ventilate at night.
* Use fan and/or air conditioning if available. Otherwise try to go to a cool or air-conditioned place (supermarkets, cinemas…) two to three hours a day.
* Wet your body several times a day with a mist, a washcloth or by taking showers or baths.
* Adults and children: drink plenty of water, the elderly: drink 1.5L of water per day and eat normally.
* Do not go out during the hottest hours (11am-9pm).
* If you have to go out wear a hat and light clothing.
* Limit your physical activities.
The symptoms of heat stroke are listed as: fever above 40C, hot, red, dry skin, headache, nausea, drowsiness, intense thirst, confusion, convulsions and loss of consciousness.
There is more health advice available on the Ministry of Health site at www.sante.gouv.fr.