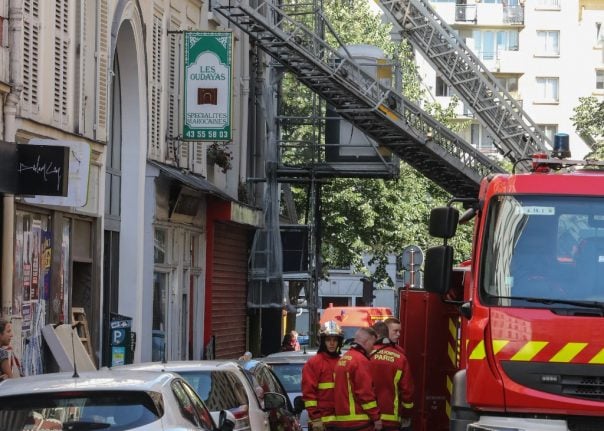 Photo: AFP
In the early hours of Saturday morning, three people died and 28 were injured in a blaze that broke out in a building in the 11th arrondissement of the French capital.
One of the victims died after jumping out of the window of the six-storey block of flats, which also housed a restaurant and a hammam.
And this was just the latest in a string of fires seen in the French capital this year.
Back in February ten people died in an apartment fire in the upscale 16th arrondissement of Paris – a woman with a history of psychiatric problems was charged with starting the blaze, and in January an explosion at a bakery in central Paris, which spread into neighbouring apartments, killed two firefighters and left dozens of residents injured.
READ ALSO: So, why does this keep happening?
Beautiful as they are, it seems that Paris' large stock of old apartment blocks may be a factor.
“There are many things that can go wrong in old buildings,” says André Goretti, president of the FA – SPP-PATS, the largest union of professional firefighters.
“There are systems in place to prevent fires breaking out in France, including landlords being required to check the gas and electricity wiring in their apartments is up to code,” he says, but added that the problem is that these rules often aren't followed.
“Owners will often do whatever they want,” he said.
Firefighters also face limits due to the nature of the buildings in Paris especially tall apartment blocks, Goretti says – and then there's the problem of the ubiquity of wooden staircases in the French capital.
While they might be a charming feature of the city's iconic apartment blocks, they also help flames to spread through a building more quickly than their less attractive concrete counterparts. The aftermath of the bakery explosion in February. Photo: AFP
Nevertheless, Goretti says that this is not a particular problem in the French capital nor in France in general.
“It is always worse in big cities like Paris and Marseille because there are more people and more buildings so if a fire does start the potential threat to life will be much higher,” he said.
Some of the recent cases were also much worse because they took place at night or in the early hours of the morning when people were much more likely to be at home and asleep, Goretti explains.
“The reasons behind the fires are common everywhere,” he said, referring to the fact that most fires in Paris are caused by accident, with the case of arson in February very much the exception.
“Overall we have very well-established rules and protocol but no one can anticipate accidents.”