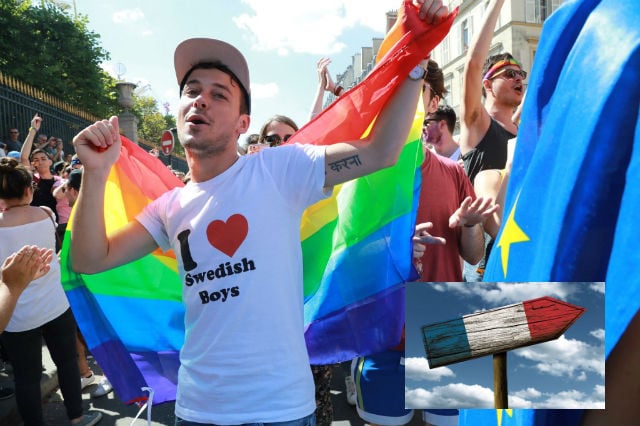 The Gay Pride parade in Paris will take place this Saturday. Photo: AFP

French President Emmanuel Macron will be in Marseille on Monday, to close the Sommet des deux rives, which brings together several countries around the Mediterranean.
The event ends with a lunch organised by the city of Marseille, with representatives of the various countries present and French MPs belonging to Macron's La Republique en Marche.
The former head of a budget Thai airline goes on trial in Paris on Monday over a deadly 2007 plane crash that killed 90 people, nearly two-thirds of them foreigners.
Filed by the families of the nine French victims along with one survivor, the civil suit says the crash was an “accident waiting to happen”. It raises a string of allegations against the now-defunct airline, from exhausted pilots to falsified flight logs. Photo: AFP
Tuesday June 25th
France's national agency of food and health safety ANSES is set to publish its dietary recommendations for children, pregnant women and the elderly on Tuesday.
A rally against the planned reforms to unemployment insurance will take place in Paris on Tuesday.
The government presented its draft proposals for toughening up the system around French unemployment benefits – both in terms of who is eligible and how much they get in payments – last week. And while France has enjoyed the reputation of being generous with its unemployment system for some years – it seems the tide could be turning. Find out more about the changes here.
Wednesday June 26th
Macron and 'first lady' Brigitte are heading to Tokyo on Wednesday to meet Japanese Prime Minister Shinzo Abe, as well as the country's new emperor Naruhito.
Also on Wednesday France's High Council for Climate, established by Macron in November, will deliver its first report on French climate action.
The council is composed of 13 scientists, economists and other experts, and is responsible for evaluating the energy policies and measures implemented in France and issuing recommendations. Photo: AFP
Thursday June 27th
Mont Blanc Marathon, June 27th-30th, Chamonix
The Mont Blanc Marathon is a sporting event that features eight running competitions around the ski town of Chamonix in Mont Blanc. Every year, more than 10,500 runners and 30,000 spectators from more than 80 different countries take part in the event.
Friday June 28th
Macron will be in the large Japanese port city of Osaka on Friday to take part in the G20 summit.
Friday also marks 100 years since the signing of the Treaty of Versailles, which officially ended the First World War in 1919.
The French health authorities will also make their decision over whether to stop reimbursing homeopathy treatments on national health insurance.
The French health service currently reimburses 30 percent of the cost of homeopathic medicines, but a report by health authority La Haute Autorité de Santé (HAS) released last month stated that this policy should be scrapped.
This is down to the fact that it provides an “insufficient medical service”, according to the health authority based on a study of 1,200 homeopathic medicines.
La Rochelle International Film Festival,  La Rochelle, June 28th – July 7th
Don't worry if your invitation to Cannes got lost in the post, you can hit the painfully hip La Rochelle International Film Festival this month instead.
The festival offers a diverse selection of films by international directors and showings of classic silent films while a pianist accompanies them live. Photo: AFP
Saturday June 29th
Gay Pride will take place in Paris on Saturday. This year, the parade route will start at Montparnasse and head in the direction of Place de la République. For more information click here.
An exhibition dedicated to the works of Spanish artist Joan Miró will open at the Fondation Maeght in the Provencal town of Saint-Paul-de-Vence on Saturday.
Sunday June 30th
The haute couture autumn-winter collection shows will take place in Paris on Sunday.