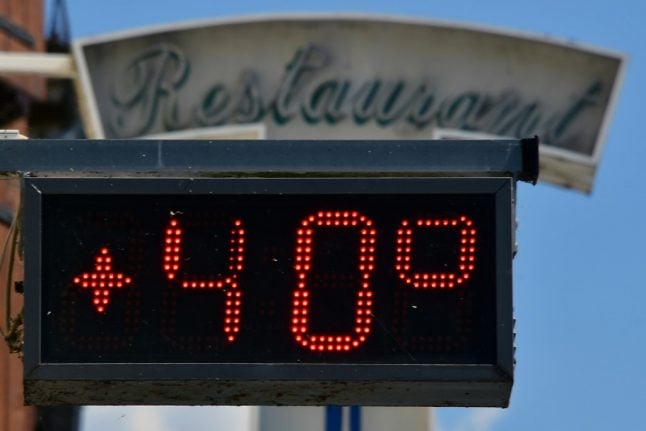 It's going to be hot this week. OK, so June in France is usually quite warm, but this week the temperatures are forecast to be very high – so much so that French weather forecaster Météo France has issued orange weather warnings for several areas and the Ministry of Health is broadcasting warnings about a possible risk to health from the canicule (heatwave). The heatwave is caused by a weather front pushing in very high temperatures from the Sahara and North Africa over France. It is forecast to last all week, after which temperatures will fall back to usual June levels, which are still warm but not quite as warm as this.

Where will the heatwave strike?

Almost everywhere in France. Temperatures will, as usual, be hottest in the south of the country with Bordeaux expected to reach 39C and Toulouse 38C. There will also be high temperatures in Lyon with 41C predicted. Even the Alps will be warmer than usual and meterologists have expressed concern that some of the 'eternal' snow at the top of Mont Blanc could melt.

Although the temperatures will be hottest in the south, the north will also see extra humidity which will make it feel hotter. With the combination of heat and humidity, temperatures in Paris will feel like a sticky 47C at their highest point.

Yes, there's one place in France you can go if you're not a fan of high temperatures – Brittany. It won't exactly be cold in the far north west of France, but temperatures will be in line with the average for June, peaking at about 29C in Brest.

What if I can't get up to Brittany?

Well the mayor of Paris has put in place a number of measures to help people in the city stay cool. The city has activated its level three heat protection plans. This involves setting up 'cool rooms' that are open to everyone to go and chill out and cool spaces in public areas with air conditioning and cool water misters. Gare de Lyon, Beaugrenelle and Opéra will be testing these 'islands of freshness'.

There are numerous drinking water stations and fountains around the city, and a smartphone app – Extrema Paris – will allow people to look up the nearest to them, as well as the nearest cool room.

Anyone identified as elderly and vulnerable will be contacted with a message giving them tips to staying cool and hydrated, and elderly people can also request a list to help them locate their nearest cool room.

More information on services and tips for staying cool is available at www.sante.gouv.fr.

READ ALSO Is it ever legally too hot to work in France?