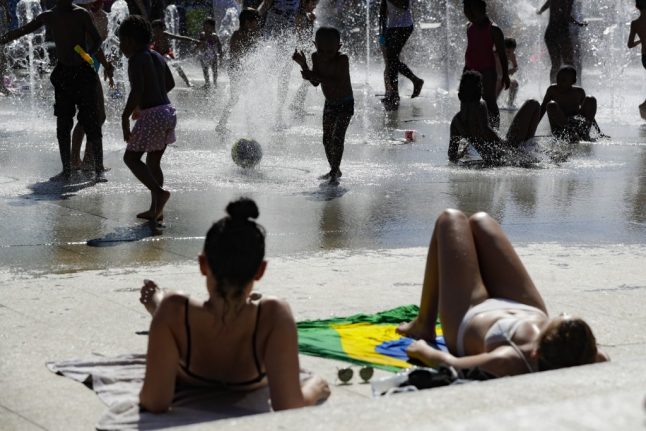 With temperatures predicted to climb to 42C on Thursday, we look at what measures the city of Paris is taking to make its citizens more comfortable. Public spaces such as town halls and government offices will open up air conditioned rooms to people who need them. There will be 50 air conditioned spaces open every day from 2pm to 6pm, and elderly or infirm people can request to be driven to their nearest cool room. To find out more about your nearest room, there is a dedicated number to call – 3975.

There will also be cool spaces in public areas, with Gare de Lyon, Beaugrenelle and Opéra piloting 'islands of freshness' which involve benches in shady spots and misters spraying cool water vapour into the air.

Paris has plenty of drinking water fountains and actual fountains where people can either have a drink or stay under the spray to cool off. An app – Extrema Paris – will allow you to look up where your nearest water station is. In total the app lists 922 places that are either cool, shady or have free water available.

If a fountain isn't enough, you could always go swimming, many pools are staying open until 10.30pm all week and from July 1st the free open air pool at the Bassin de la Vilette will be open.

The 13 gardens opened at night during the summer are Louis XIII (4th arrondissement), Grand Explorateurs (6th), Boucicaut (7th), Villemin (10th) on Friday and Saturday, Emile Cohl (12th), Georges Meliès (12th), Louis Armstrong (13th), Montsouris (14th), Sainte Périne (16th), Louise Michel (18th) Friday and Saturday, Buttes Chaumont (19th), Séverine (20th), Aurélie Salel (20th). The 5 additional parks and gardens opened during the heat wave are: Monceau (8th arrondissement), Marcel Pagnol (8th), Montholon (9th), Ferdinand Brunot (14th), Brassens (15th).
Children and the elderly
The heat affects everyone, but people particularly prone to suffering heat-related health complications are children, the elderly and people with pre-existing health conditions. During the heatwave of 2003, 15,000 people died of heat-related conditions, the majority of them elderly.
City authorities will be distributing fans and awnings to schools and nurseries, plus extra bottle and jugs so that the children can have access to water at all times.
The city also has an index of people deemed vulnerable to heat, mostly the elderly or ill, and they will be receiving messages advising them on ways to stay cool and what services are on offer. They may request to be driven to their nearest cool room by city authorities.
Also at risk are the homeless – the Paris water authority has donated 5,000 bottles of water which will be distributed by local volunteers. The homeless shelter at Porte de la Chapelle will extend its opening times to make it 24/7, and can offer showers for up to 400 people a day to cool off.
There is more heat safety advice available at www.sante.gouv.fr.