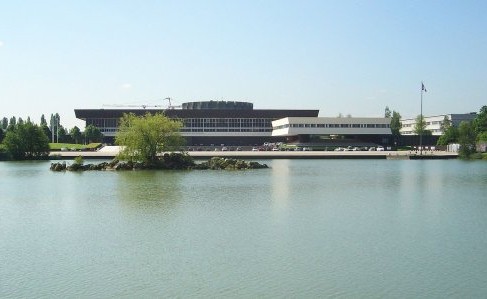 The Ecole Polytechnique in Palaiseau, near Paris. Photo: Google maps

1. It's supervised by the Ministry of Defence.

This is due to its unusual history. Founded in 1794 by the mathematicians Lazare Carnot and Gaspard Monge, 10 years later it was taken over by Napolean and dedicated as a military academy. It was Napoleon who gave it the motto it still uses today Pour la Patrie, les Sciences et la Gloire (For the Nation, science and glory. These days it has no military curriculum, but remains technically supervised by the Ministry of Defence. In a nod to the school's military past, cadets still parade on Bastille Day in Paris. Photo: AFP

2. It is very international.

It has 3,000 students, of whom 36 percent are overseas students, and 670 faculty members, 39 percent of whom are international. In total there are 60 different nationalities on campus. It focuses on science, engineering and technology and is highly selective, accepting only a fraction of the thousands of students who take its entrance exam each year.

Students, except those in exchange programmes, are required to do six hours of sport a week and the university has excellent facilities for a wide range of sporting activities. Beer pong (or le bière-pong as its known in French) is not accepted as part of the sports quota.

So diverse and fascinating is the university's history that it has recently opened a museum to tell its own story. The museum features the history of the school and the work of some of its most famous alumni. This is a dizzying list which includes former president Valéry Giscard d'Estaing, Citroen founder André Citroen, builder of the Paris Metro Fulgence Bienvenüe, Millau Viaduct engineer Michel Virlogeux and too many Nobel Prize winners to count.

The École Polytechnique has been ranked number 60 in the world in the latest QS global rankings – the highest rating in France for a traditional university.

The top end of the list is heavily dominated by American universities, with the Massachusetts Institute of Technology (MIT) at the number one position, followed by Stanford, and Harvard. Britain's top two universities Oxford and Cambridge and Oxford are ranked at 4 and 7 respectively.