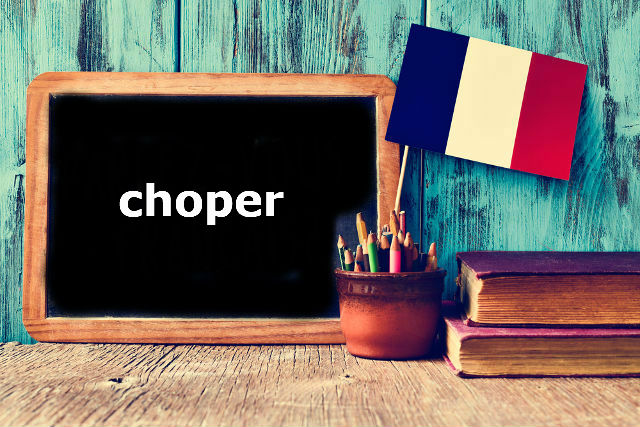 Photo: Depositphotos
Why do I need to know choper?
This versatile French verb is frequently used to talk about a variety of activities that tend to take place in the shadows.
What does it mean?
The principal and fairly innocuous meaning of choper (pronounced 'show-pay') is ‘to catch’. That can be in the literal, physical sense, like choper la balle, meaning ‘to catch the ball’, but also in a more general or figurative one, as in les flics ont chopé l’assassin – ‘the cops caught the killer’.
It works for illnesses as well, as in Juliette n’est pas là aujourd’hui, elle a chopé la crève – ‘Juliette isn’t here today, she caught a cold’.
Besides meaning ‘to catch’, choper can also mean ‘to steal’, like quelqu’un a chopé mon portefeuille dans le métro – ‘somebody nicked my wallet on the metro’, though this is no longer the most common use of the verb.
More frequent these days, especially among the young, is the use of choper to talk about successful attempts to do things you probably wouldn’t tell your mother about.
The idea of ‘to catch’ is not so different from ‘to pick (somebody) up’, which is what choper usually means when used in festive, nocturnal, or romantic situations. For example, il/elle a chopé une fille/un mec is the way to say ‘he/she picked up a girl/guy’. Serge Gainsbourg, known for his ability to choper, with Jane Birkin. Photo: AFP
On the other hand, ça fait des mois que je n’ai pas chopé indicates a lack of success: ‘It’s been months since I’ve picked someone up/hooked up with somebody/gotten lucky’. As is often the case when discussing this subject, choper can be pretty vague – it implies some sort of romantic liaison, but is relatively ambiguous with regards to what exactly that might have entailed.
Another common euphemistic use of choper has to do with illicit substances – it is used the way English speakers might use  ‘to score’ or ‘to cop’, as in les riches n’entrent dans la cité que pour choper – ‘rich people only go into housing projects to score’.
Alternatives
Last week, The Local France addressed the subject of verlan, French argot constructed by reversing the order of syllables in a word. The verlan version of choper is pécho ('pay-show'), and while it can be applied in most instances where choper can be applied, it is most frequently used to talk about romantic success, as in, Gilles n’est pas encore sorti de sa chambre, je crois qu’il a pécho à la boîte hier soir – ‘Gilles hasn’t come out of his room yet, I think he picked somebody up at the club last night’.
You’ve probably figured out by now that it’s best to be careful about what meanings of choper and pécho you use with whom.