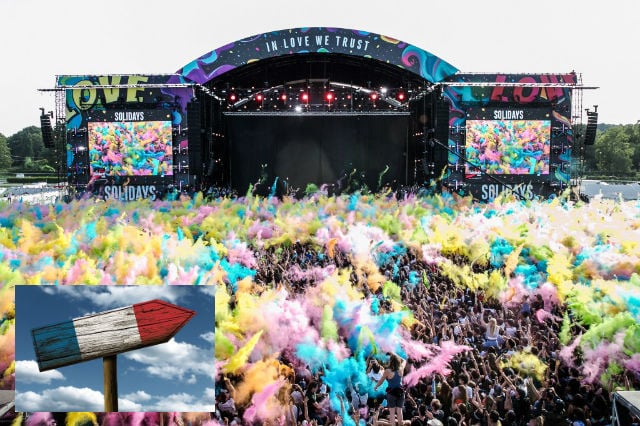 Friday marks the beginning of the Solidays music festival in Paris. Photo: AFP

Zelensky will make his first visit to France as head of state, with Europe seeking progress on reforms and the conflict with separatists in its east, the French presidency has said. Zelensky, a former comedian whose crushing victory in April elections shook Ukraine's political establishment, will hold talks with Macron on Monday afternoon.

Meanwhile French Prime Minister Edouard Philippe will be in Rouen for the inaugural meeting of Team France Export.

The project aims to “bridge the foreign trade deficit”, “create jobs” and “boost the international development of companies”.

Monday marks the beginning of the baccalaureate exams for pupils across France. Photo: AFP
Tuesday June 18th
Macron will be in the Parisian suburb of Suresnes on Tuesday to commemorate General de Gaulle's appeal – made from London on June 18th 1940 – urging the French to resist Nazi occupation.
The French prime minister will present the reforms for unemployment insurance.
French MPs will vote on the loi d'orientation des mobilités, a wide-ranging transport bill that has been making its way through the parliamentary process.
Its aim is to alleviate the transport difficulties still experienced by many in France, especially outside the big cities, which make travelling by car virtually the only option in some places.
Elton John is set to kick of the French leg of his farewell tour in the northern French town of Villeneuve-d'Ascq on Tuesday. Photo: AFP
Wednesday June 19th
Wednesday marks the end of the latest corruption trial of Patrick and Isabelle Balkany.
Here's a look at who the elderly political power couple are, and why their scandalous financial affairs have kept France gripped for over 20 years.
A Paris court will deliver its verdict on the transfer of the tens of thousands of euros raised online for Christophe Dettinger, the former boxer who was filmed punching police officers during anti-government protests in Paris back in January.
Choregies d'Orange, June 19th-August 6th, Orange
Classical music fans will love this festival dedicated to opera.
Located just south of picturesque Avignon in the south of France, the festival's acts take place in the ancient Roman theatre, the Théâtre Antique d'Orange.
Sofilm Summercamp, June 19th – June 23rd, Nantes
Wednesday also marks the beginning of the Sofilm Summercamp film festival in Nantes.
Film lovers won't want to miss out on this movie festival which combines previews of films from Cannes, offbeat and rare films, and outdoor screenings. Macron with outgoing President of the European Commission Jean-Claude Juncker. Photo: AFP
Thursday June 20th
Macron will be in Brussels on Thursday for the European Council which will see the appointment of the successor of Jean-Claude Juncker.
Meanwhile in Bordeaux the official opening of the Musée Mer Marine will take place.
Friday June 21st
Solidays, June 21st –  June 23rd, Paris
A festival with a conscience; Solidays raises money for the HIV and AIDS charity, Solidarité Sida. In recent years the festival has raised millions of euros. Located on the famous Longchamp racecourse, the festival unites musicians from all different genres, so expect to hear a little bit of everything; indie, rock, pop, hip hop and electronic.
Fete de la musique, June 21st, Whole of France
What better way to celebrate the arrival of summer, than a whole day of concerts and musical performances? Oh…and they're all free.
Every genre of music will be ticked off with gigs taking place across the whole of France.
Artists and groups will take to various venues as well as the streets in participation, so it will be difficult to miss. Photo: AFP
Saturday June 22nd
A festival to celebrate the arrival of summer called 1001 Lights will be held at the Domaine de Montauger on Saturday, with carriage rides, games for children and tastings of local produce.
Sunday June 23rd
French Grand Prix, Le Castellet
Last year this event made a comeback after a 10-year stint off the Formula 1 calendar and will be held again this year on June 23rd.
The stunning location of Le Castellet in the Provence-Alpes-Côte d'Azur region of France makes the event will be even more of a must-visit.