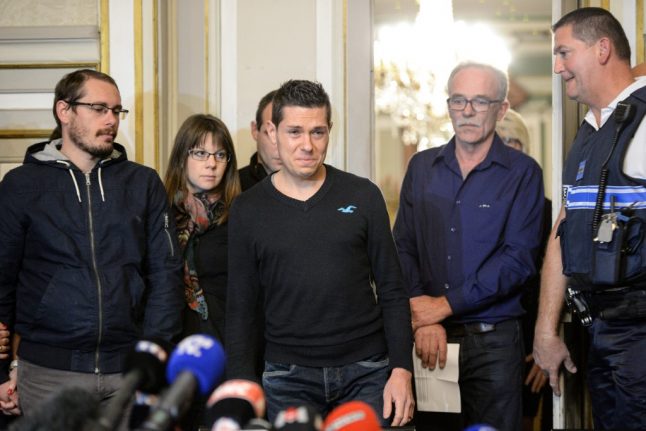 Jonathan Daval, centre, initially organised searches for his wife Alexia, but has now admitted murdering her and partially burning her body. Photo: AFP

Jonathann Daval, 35, had in January 2018 confessed to killing his wife Alexia in October 2017 after initially posing as a distraught husband and even organising events in her memory.

The charred body of Alexia Daval, a 29-year-old bank employee, had been found hidden under tree branches near their town of Gray-la-Ville in eastern France. Alexia Daval was 29 and worked in a bank in the eastern region of France. Photo: AFP

But the husband had until now not admitted to burning her body after the crime – an omission that had continued to distress Alexia's parents – and had shown inconsistencies in other aspects of his version.

“Faced with the urgent demand of his parents-in-law, who had implored him to tell the whole truth, he finally admitted not only killing her but then partially burning her body,” said the prosecutor for the eastern Besancon region, Etienne Manteaux.

Daval also confessed to “knocking the face of his wife against a concrete wall” and then dealing between “five to 10 blows at the level of the face” before strangling her “for around four minutes”, said Manteaux.

“The description of the violence is perfectly consistent with the injuries found” during the autopsy, he added.

The hours-long reconstruction took place in the wood where Alexia's body was found and reunited Daval with her parents Isabelle and Jean-Pierre Fouillot.

“We wanted to know the truth and we had it,” Isabelle Fouillot told reporters afterwards. Alexia's parents speaking after the reconstruction of her murder. Photo: AFP

On her son-in-law, she said: “It is so hard for now. We loved him. Forgiveness, that comes a bit later.”

“I know him well. I know he loves us and we have a strong connection with him. It was not easy,” she said, adding: “Alexia can perhaps now rest in peace.”

Manteaux said he expected the trial – at which Daval risks life imprisonment if convicted – to start in the second half of 2020.

He said that Daval had at the reconstruction “asked for forgiveness while saying that he was unforgivable”.

After the body was found in October 2017, Daval had initially insisted that Alexia had gone jogging and never come back.

Before his arrest and confession over some three months later, he appeared a press conference with her parents and led one of the outings organised across the country in her memory.