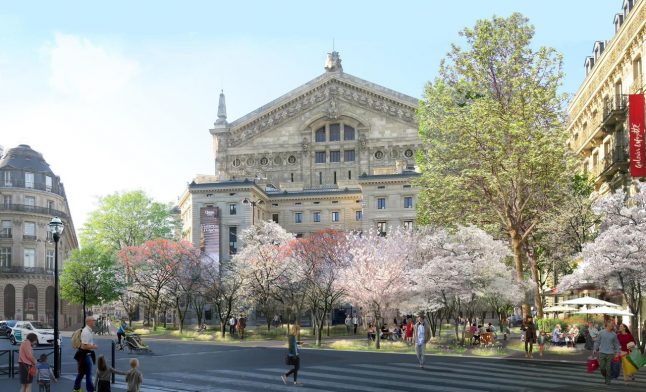 Palais Garnier is one of the symbolic sites in central Paris set for a green makeover. Photo: Ville de Paris/Apur/Luxigon
The areas set to be rejuvenated with some fresh foliage are Hôtel de Ville in the 4th arrondissement, Gare de Lyon in the 12th, Palais Garnier in the 9th and along part of the banks of the Seine, Paris Mayor Anne Hidalgo has announced.
“We have an obligation to act today to avoid making this city impossible to live in down the road,” she said in an exclusive interview with Le Parisien.
“We will use one of the two pedestrian lanes on the Right Bank of the Seine, while the other road will remain paved for the purposes of emergency vehicles,” she said.
READ ALSO: Right Bank/Ville de Paris/Luxigon
At Hôtel de Ville and Gare de Lyon, the plan is to create 'urban forests' above the car parks,” said Hidalgo, adding that at Palais Garnier the forest will be planted behind the building.
There are also plans for trees will also be planted on smaller sites, such as Rue Louis-Blanc (10th) and Boulevard Pasteur (15th).
She added that there are also plans for a planted walk from La Villette to Buttes-Chaumont in the 19th. Gare de Lyon/Ville de Paris/Apur/Luxigon
And Hidalgo doesn't appear to be wasting any time, with the forests set to appear during 2020.
In her interview with Le Parisien, the mayor said consultations would be held “with the mayors of the arrondissements concerned and residents”, and a debate will be held in Paris Council.
But, perhaps unsurprisingly, the plans have not been well received by everybody. Hôtel de Ville/Ville de Paris/Apur/Luxigon
The mayor's announcement in Le Parisien provoked the ire of opposition politicians who protested the move at the Paris Council on Thursday night.
“While sitting in council for three days dealing with urban projects, we discover in a newspaper that the mayor plans not to decide (in assembly) but in her office and then announce it to the press,” politician Eric Azière told the French press.
Another opposition politician in the Paris Council Danielle Simonnet said the mayor's method showed a “contempt for democratic debate”.