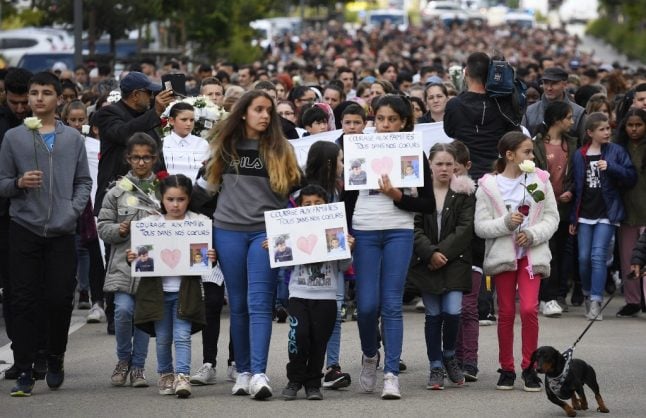 On Thursday, around 1,000 people, including many children, joined a silent march for the 9-year-old through Lorient. Photo: AFP
A cousin, aged seven, of the boy was also critically injured in the incident Sunday in the northwestern seaport town of Lorient.
The driver was fleeing a roadside spot check by police and did not stop after hitting the two children who were on the pavement at the time.
Police immediately launched a manhunt for the 20-year-old driver and his female passenger, 21, who abandoned their vehicle several hundred metres from the scene and fled on foot.
The female passenger turned herself in late Wednesday and has been detained for failing to assist a person in danger, a police source said. People gather at the place where two children were hit by a car in Lorient, western France, before taking part in a silent march. Photo: AFP
More than 500 people turned out for the boy's funeral on Wednesday in a Muslim ceremony held at a local Turkish cultural association.
That evening, the family flew to Turkey where the child's body was to be buried in the eastern town of Agri, near the border with Armenia.
Speaking on behalf of the family, Ahmet Makas, a member of the Turkish cultural association, called on the driver to “turn himself in” and “take responsibility for his actions”.
'Covered in blood'
On Thursday, around 1,000 people, including many children, joined a silent march through Lorient.
Carrying white roses, the crowd walked through the town, stopping to leave the flowers at the spot where the two boys were mown down, with many people
reduced to tears, an AFP correspondent said.
Among the marchers was Virginie Rouxel, who was in the area at the time of the incident with her young daughter who goes to the same school as the boy who died.
She said she saw a white vehicle zigzagging away several moments after the crash and the driver running away.
“My daughter and I saw the boy covered in blood. It was really shocking.
When we got home, my daughter drew a picture of the accident,” said the 35-year-old, indicating she would seek psychological counselling.
The seven-year-old, who remains in serious condition at a hospital in the northwestern French city of Brest.