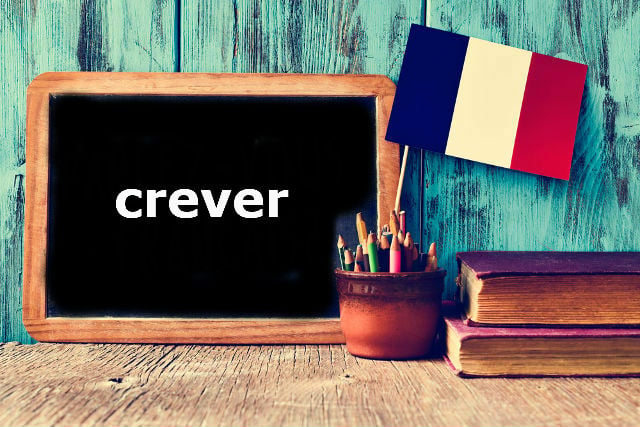 Photo: Depositphotos
Why do I need to know crever?
The verb crever offers a slangy way to show a certain intensity of feeling, which can come in handy when your school-taught French leaves you sounding like a textbook.
What does it mean?
To crever literally means ‘to puncture’, but the meaning we’re concerned with in this case is the colloquial one, ‘to die’, sometimes translated as ‘to croak’ or ‘to snuff it’ because of its slangy nature.
For example, à ces températures, les sans-abri commencent à crever de froid, means ‘at these temperatures, the homeless are starting to freeze to death.’
When the action crever is done by one person to another, it becomes ‘to kill’, which is a threat you probably want to be careful about using but which it would be good to understand, like if someone tells you Casse-toi ou je vais te crever ! – ‘Get out of here or I’m going to kill you!’
Much as in English, all of this talk about dying is often an exaggeration, as with the Je crève de faim sort of construction, equivalent to the English ‘I’m dying of hunger’ or ‘I’m starving’. Of course, it’s important to pay attention to context, as there really are people who are dying of hunger, but that group probably doesn’t include your co-worker who didn’t have time to eat breakfast this morning.
Here are a few more examples of typical Je crève… phrases, though this list is by no means exhaustive:
Je crève la dalle – ‘I’m starving’/’I’ve really got the munchies’
Je crève de soif – ‘I’m dying of thirst’/’I could really use a drink’
On crève de chaleur ici – ‘We’re overheating here’/’It’s really hot in here’
Il crève de jalousie – ‘He’s dying of jealousy’
Elle crevait de rage – ‘She was boiling with rage’
C’est à crever de rire – ‘That’s hilarious’ (literally ‘to die of laughter’)
If, on the other hand, you’d like to express your aversion towards something, another construction that is also common is Plutôt crever !, meaning ‘I’d rather die’:
Un jour, vous allez travailler pour moi. – Plutôt crever !
‘One day, you’re going to work for me.’ – ‘I’d rather die!’
When there's no choice in the matter, the appropriate phrase is marche ou crève, meaning 'march or die', which evokes military discipline but can be used in any bad situation where one is forced to do something difficult or disagreeable, or suffer the worst.

Marche ou crève ! C'est un combat, il n'y a pas de trêve ! ('March or die! It's a battle, there's no truce!')
Alternatives
The standard French for ‘to die’ is mourir, and tuer is ‘to kill’.
Another colloquial alternative is casser sa pipe, which literally means ‘to break one’s pipe’ but is often translated as ‘to kick the bucket’. As in Son grand-père peut casser sa pipe d'une minute à l'autre – ‘His grandpa could kick the bucket any minute’.
Of course, casser sa pipe and crever are not the expressions to use when you want to talk about death in a tactful or respectful way, so you most likely want to avoid them in formal situations or when someone is likely to get offended.
For more French Expressions and French Words of the Day you can CLICK HERE to see our full list