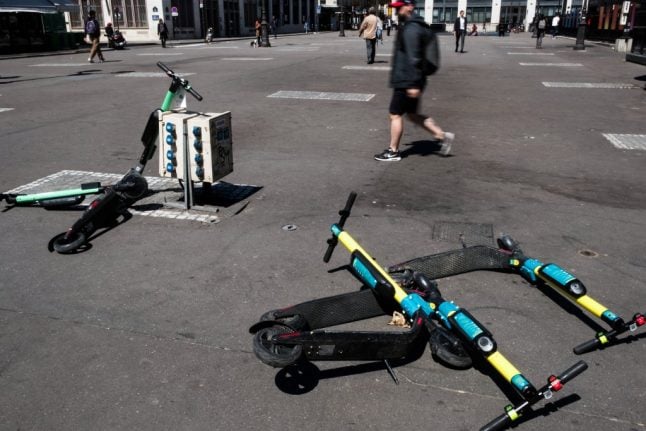 The 25-year-old man was hit by a truck in the Goutte d'Or area of the 18th arrondissement on Monday evening.

The rider was hit by a truck after refusing to let the vehicle pass in front at traffic lights, according to reports on Europe1 radio.

He was rushed to hospital in an ambulance but later died of his injuries.

Police have launched an investigation to determine the exact cause of the accident. The driver of the truck was being questioned by police but was not under the influence of alcohol or drugs, police said.

A source close to the case, who asked not to be named, said that the lorry driver had priority on the road in the incident. Investigators will study video surveillance footage of the scene.

His death is believed to the first fatality involving the electric scooters but given the rising number of worrying incidents and injuries of both riders and pedestrians, authorities and indeed members of the public in Paris will hardly be surprised by the news.

In recent weeks authorities in Paris have taken steps as part of a crackdown both on riders and the operators of the electric scooter rental schemes, which have flooded the French capital with 20,000 vehicles.

In April Paris City Hall rolled out steep fines for electric scooter users, not least those who take to the pavement to avoid the traffic jams.

Earlier this month Paris Mayor Anne Hidalgo signalled she had had enough of the thousands of electric scooters being left on pavements around the French capital and introduced a ban forcing operators to make sure the vehicles are left in official parking spots on roads.

The mayor has also ordered a speed limit cut to 20 km/h after a worrying rise in the number of accidents involving electric scooters,  known as trottinettes electriques in French.

There has been a huge rise in the number of accidents involving the e-scooters with some riders left with horrific injuries after colliding with cars, motorbikes or pedestrians, some of whom have also been left injured.

Questions are being asked over whether users need to take out special insurance given that some providers do not include it in the rental scheme.

Despite authorities wanting to improve safety measures MPs voted last week against introducing a new law that would have made it compulsory for riders of electric scooters to wear helmets.

Transport minister Elisabeth Borne said: “The French are fed up with us imposing rules on them. We recommend wearing helmets [but] it is for each person to act responsibly.”

According to French press reports, a man aged 81 died in April in Levallois-Perret outside Paris, days after being knocked over by an electric scooter.