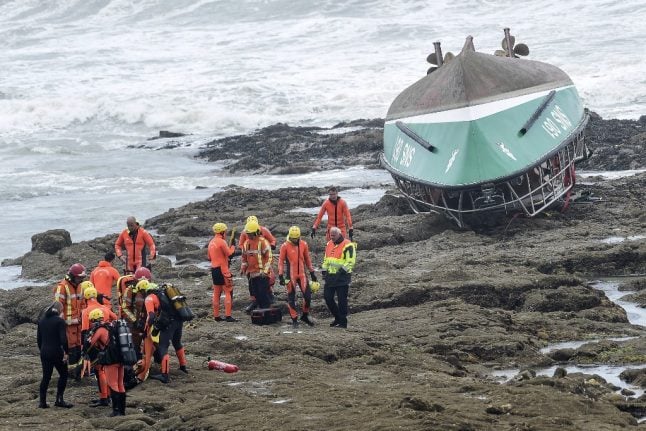 The lifeboat shortly before it capsized. Photo: AFP

The storm – which hit France this morning after travelling through Spain overnight – has brought winds of 120 km/h to the western part of he country.

Locals officials in the Vendee – just north of La Rochelle – have reported that three people are dead and one is missing after a lifeboat capsized.

The lifeboat from the French rescue organisation Société nationale de sauvetage en mer (SNSM) had been going to the aid of fishing boat which got into difficulty in strong winds and rough seas off the beach of Tanchet aux Sables-d'Olonne. “In late morning, a boat from the SNSM capsized 800 metres from the coast around the Sables d'Olonne with seven people on board,” the local prosecutor's offices said in a statement sent to AFP.

Three of them died while four managed to swim to shore, the statement added.

Three helicopters and around 60 firefighters were attempting to find the bodies of the rescuers near the site of the accident about 60 km north of La Rochelle.

The team had been attempting to help a fishing boat which was struggling in the giant swell caused by storm Miguel.

Photos from the scene show waves crashing over the front of the small rescue boat as it headed out.

After capsizing, it ended up upside down on the rocky shore.

The captain of the fishing boat is also missing.

“So far we haven't been able to find the fishing boat. We've found fragments of the boat and an empty lifeboat,” the regional maritime authority told AFP.

It said the rough sea conditions were at level five of the nine on the Douglas scale, indicating waves of up to four metres (13 feet) high.

Yannick Moreau, the mayor of Les Sables d'Olonne, said it was “incomprehensible that any boat went out on a day like today.”

The SNSM gets funding from the state but is a nonprofit organisation run by around 8,000 volunteers.

“The SNSM boat at Les Sables is a crew of professionals, sailors who know the ocean, know the conditions,” Moreau said, adding that his town was “in shock.”

Storm Miguel has led the French weather service to put large areas of the Atlantic coast on alert for high winds and heavy rain.

As the storm continues to batter the western coast, people have been warned to stay away from the beaches and avoid going out in boats.A total of 8 departments are currently on orange alert – the second highest warning.

People in these areas are warned to take precautions due to the risk of dangerous weather conditions, with the warnings expected to remain in place until Saturday at 6am. The storm is expected to move north throughout Friday towards Brittany, before heading out to sea overnight.