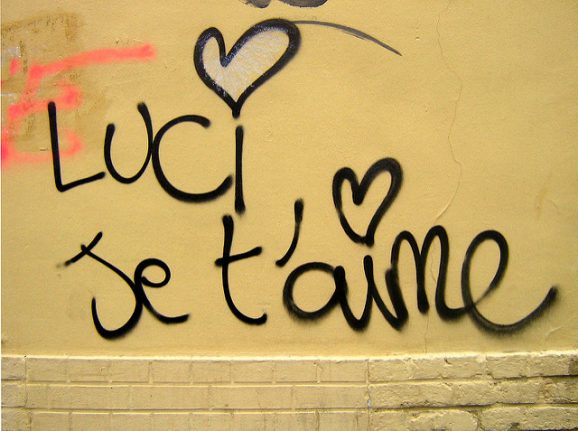 Now we know there are many, many things Anglos do that make you Frenchies feel awkward. Indeed here's a list of our own sins. But of course it works both ways. Now there's no need to change, but it's important you know.

1. Argue like you are going to kill each other…

And then ten minutes later go for lunch together as though never an angry word was spoken! This freaks us out. Anglos don't do arguments in public unless it involves fists and hair-pulling. Driving through red lights, or right up our backsides and beeping constantly is bad for our blood pressure. Remember we are already on the “wrong side” of the road over here, so it's in your own interests to give us some road space.

You Frenchies love a good 'f**k', in fact you say it all the time in their own language and in English. We know you love to say it when talking to Anglos, in fact some of you even use the C-word at will. But you must remember your swear words are the strength of a Stella Artois while ours are the level of Cognac. Do we really have to go around all 19 people at the restaurant table and do “la bise”? And then do it all again when we leave? Do we kiss older people, do men kiss men automatically, children, babysitters, colleagues? So many awkward moments. Don't get us wrong, long live la bise, but let's face it there's a place in this world for saying “hi everyone” with a smile and a little wave.

6. Not admitting you speak English better than us

Oh how many times have you people let us language learners struggle on in broken French word after word, minute after minute, hour after hour, month after month… only for us then to find out that you have a masters in English, an Australian dad and lived in New York for 10 years? No doubt you're keen to allow us to practice our French, which is nice!

7. Speaking English without giving us a chance

At the other end of the scale are those who take one at look at us, see our red sun-burn or make-up plastered faces, strange dress sense, beer bellies and freckles and just launch into English without even giving us a chance to show off how much effort we have made to learn French. Saying Bonjour everywhere you go whether it's in a lift or a doctor's surgery waiting room is nice. We appreciate it but now you can't stop there! You've started the small talk and we need more or we get twitchy. Just let us say something about the weather.

Come on you know when we ask for “an honest opinion” what we really mean is just be nice and lie to us. Your appraisals on our clothes, ability to speak French, or own countries are too honest for us to cope with.

10. Calling all English speakers after a medieval tribe It's unlikely (though not impossible) you'll ever see a British, Irish, American or even an Australian in France wearing a loin cloth or a woolen undershirt, yet the French constantly refer to ALL English-speakers as “Les Anglo-Saxons” – those Germanic folk who occupied Britain in the 5th century. Come on France, get up to date and remember the Brits are very different from Americans and Australians.

(If you want to know why the French call English speakers Anglo-Saxons CLICK HERE.)

After two hours of entree, plat, fromage, desert, cafe and conversation you must understand our brains have turned to boudin, our legs have seized up and we no longer have the will to live.

Frenchies, you must know Anglos are programmed to sit at the table for a maximum of 15 mins. Anymore and you risk us downing all the wine on the table.

12. Falling in love after one date Frenchmen, if you could at least delay your declarations of love to your Anglo girlfriends until the second week of dating, that would spare them a lot of worry and concern and save money on phone calls home. And go easy on the texting too. Please limit it to just 25 a day. Also, French women if you could accept our drinking habits that would be lovely.

In Britain the five-a-day rule includes kebabs, Walkers crisps and Mars Bars, so when you Frenchies insist on actually having five pieces of delicious-tasting fruit and veg a day, it makes us feel guilty. 14. Looking good all the time

It would also be helpful for our confidence and state of mind if you Parisans could put less effort into what you wear each day. You dress for work like you are off to a wedding. Remember we like to keep our pyjamas on in the office

15. Getting your kids to eat food

Look when our kids get around the table for dinner they want to have a food fight. It would reduce our stress levels no end if you could just let yours join in the fun instead of teaching them the importance of food and meal times and eating as a family from an early age. 16. Smoking over our dinners

Come on, we haven't smoked since we were Anglo-Saxons. So lighting up on a “terrace” (which actually has four walls and a roof) while we're eating is going to irk us. We'll just get you back by talking even louder than we normally do. And no one wants that hey? Yes, we look a bit strange and talk loudly in a foreign tongue and wear loin cloths, but can't you limit staring on the Metro to three seconds per passenger?

Anyway enough of that. For everything else you're great. Thanks for putting up with us.