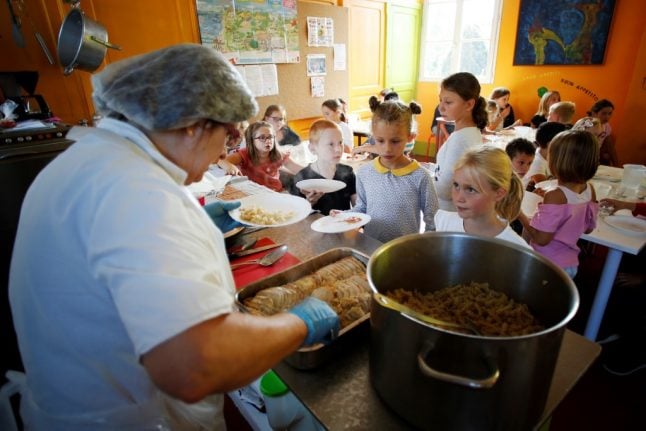 Illustration photo: AFP
For most people around the world, the memory of school meals is not a good one.
But French schools have a reputation for serving up varied, well balanced dishes that any self-respecting adult would be happy to eat.
Despite that reputation, parents in the 18th arrondissement of the French capital this week were ready for yet another fight over the quality of the food being dished up to their children for lunch at school.
Sogeres, the company responsible for providing the school meals, had said in its newsletter: “To introduce the spirit of cheerfulness [of eating lunch on the grass], on Monday June 3rd, the school board is offering a special picnic meal.”
READ ALSO France to launch free school breakfasts in fight against poverty

That meant that a total of 14,000 pupils who sat down to lunch at their school canteen were presented with triangular pre-packaged sandwiches placed on a plate.
Now, for many British and Americans – who are used to eating supermarket sandwiches al desko – this may not seem like too much of a cause for concern.
But the situation sparked the fury of a campaign run by parents called “Children in the 18th eat this” which had already launched a petition back in February 2018 to highlight the fact that the food being served up to their children by Sogeres was full of hydrogenated fat, sugar, additives, salt, preservatives and dyes.
They had also been angry over claims that many dishes were being cooked several days in advance and reheated in plastic trays.
Once again these parents are at loggerheads with Sogeres which, despite the petition, had its contract renewed in mid-2018 for another five years.
“This provider is very far from measuring up to the task,” Anne, one of the leaders of the group, who sees Monday's meal as an example of this, told Le Parisien. Photo: AFP
“We are on the verge of scandal,” she said, adding that the “use by” date for eating the sandwiches was June 4th – the very next day – and that the “organic and local” tomatoes served with them came from Spain, not France.
According to images of the meal in the French press, the sandwich was also served with watermelon, an apple, bread and butter (pictured in tweet above).
As a form of protest, the campaign group has asked parents to refuse to pay for Monday's school meal.
The Town Hall in the 18th arrondissement, which has been brought into the row, defended the decision, saying it had been approved by the group responsible for accepting menus, which includes parents, and was seen as a solution to the problem caused by the Ascension public holiday on Thursday, 30th May, with the schools also closed on the Friday.
“Since the schools had been closed since Thursday, it would have been necessary to transport Monday's meals from as early as the middle of last week,” said a spokesman from the Town Hall.
This logistical issue is down to the fact that the kitchen where school meals are usually prepared for the district is closed for construction, meaning that meals are being delivered from a kitchen in Melun, a south eastern suburb, a problem compounded by the public holiday closures.
“The sandwich solution was preferable,” they said, adding that it did however represent “a lot of clumsiness” on the part of the provider.
“At a time when we are trying to reduce the volume of plastic in the canteens, the image of these plastic containers on the plates … then in the bins is a bit deplorable.”
The Town Hall also issued an apology to parents, stating that from September 2019 “all the sandwiches served to children will be fresh”.
However not every parent was caught up in the sandwich furore.
Megan Clement, an English-speaking journalist living in Paris, tweeted: “I love this. The town hall of the 18th arrondissement has apologised to parents for the terrible crime of serving sandwiches to schoolkids instead of the usual three-course meal.”

I love this. The town hall of the 18th arrondissement has apologised to parents for the terrible crime of serving sandwiches to schoolkids instead of the usual three-course meal. pic.twitter.com/awNXTMcmYO

France's Ministry of Education states that schools must offer menus “adapted to the nutritional needs of the children” which “offer four or five dishes for each lunch or dinner, which may include a main dish with a garnish, and a dairy product” and “make portions of suitable size available”.

READ ALSO Do French kids get the best school lunches in the world?