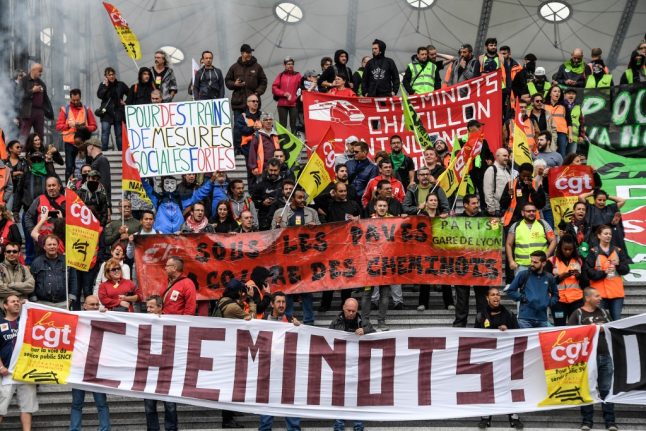 French rail workers are taking part in a national demonstration for the first time since the controversial rail reforms were adopted back in June 2018.
France's four railway unions – the CGT, UNSA Rail, SUD Rail and CFDT – called for a joint demonstration in Paris from 1pm, starting from the Place d'Italie and heading in the direction of Montparnasse, to protest against line closures and ticket counter closures, in favour of machines, in the regions.
Retired rail workers, elected officials and members of France's railroad  defense committee were set march alongside them.
Other demonstrations took place elsewhere in France, including in Lyon.

When did it all start?
During spring and summer 2018 rail unions held three months of rolling two-day strikes, the longest industrial action in over 30 years on French railways.
Train drivers particularly had resisted plans to deny job and pension guarantees to new rail recruits, as well as plans to turn the SNCF into a joint-stock company, which they see as a first step toward privatisation.
The government argued that the loss-making SNCF – a bastion of the union movement – needed to cut costs and improve flexibility before the EU passenger rail market opens up to competition.
Last year the debt was calculated at to €54.5 billion – the result of several decades of investment, especially for the creation of high-speed lines. As part of the reforms, the state has committed to absorbing €35 billion of that debt.
The French government got its way and the reforms were signed off at the end of June 2018.
What else do the reforms hold in store for rail workers?
The reforms plan to open up high-speed national train services to competition from December 2020, and the same is set to happen to regional TER trains in December 2019.
The reforms also mean that in four years time, the regions will no longer be able to assign TER lines to France's state operator SNCF, instead it must be put out for tender first.
Unions have argued that competition on the country's rail networks will see a deterioration in the service and an increase in ticket prices.

Perhaps more worryingly, the reforms mean that hiring will stop at the SNCF from January 1st 2020.
During the negotiations, unions ensured that SNCF's capital would remain non-transferable, meaning it will remain entirely owned by the state and the company cannot be privatised.
How were services affected?
Most of the trains affected were outside of major cities, with the only delays on the regional TER network.
The trains most affected by the strike were in the Auvergne-Rhône-Alpes, Hauts-de-France and Centre-Val de Loire regions.
However services on the high-speed TGV trains, Ouigo, Lyria and Thalys remained normal.
At the time of writing, Metro and RER stations in the French capital were unaffected by the demonstration. You can check for updates here.
So, are we in for another summer of strikes?
At the moment there is no indication that this is likely to be the case and the fact that there was no national call for a strike, as there was last year, indicates that there probably isn't the appetite for that kind of intense industrial action.
The UNSA union has however described Tuesday's action as a “warning shot” while the CFDT union said “it has not excluded restarting the mobilisation after today's event”.
Meanwhile the CGT has warned: “If the government does not change its attitude towards railway workers, there could be some surprises before the end of the year.”
French vocab to know
Rail workers – les cheminots
Demonstration – une manifestation
Railway reform – la réforme ferroviaire
Competition – la concurrence