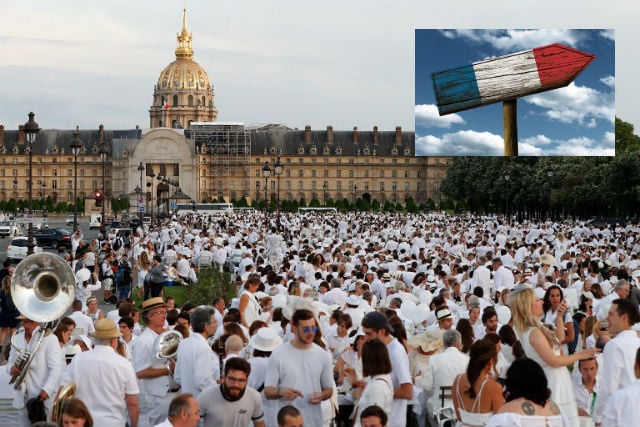 The Diner en blanc will be on Thursday in Paris. Photo: AFP

The first reading in the National Assembly of amendments to the Loi d'orientation de mobilités, France's wide ranging transport bill, takes place. The law looks at a range of issues around how to make sure that everyone in France has access to good quality public transport and how to make transport greener. The law has already been read in parliament once, but several amendments have now been added and those will be debated today. Among the amendments being considered are one to ban parking spaces within five metres of a pedestrian crossing, and one to restrict domestic flights on routes where there are trains available.

A public consultation begins in France of the revenu universel d'activite, or universal income, which is a proposal of French president Emmanual Macron's to streamline the various benefits and allowances paid into one single system. Le Festival Photo, June 1st-30th September, La Gacilly
It might have started on Saturday but there's still a long time to go if you want to catch this wonderful photo exhibition.
For the past 13 years, over 2.5 million visitors have descended on La Gacilly, in the northwestern region of Brittany, for the biggest outdoor photography festival in the country.
Committed to sustainable development, the exhibition showcases art and photojournalism with hundreds of photos installed throughout the streets of the village to peruse at leisure.
Tuesday, June 4th

Eid-al-Fir – the end of the month of Ramadan will be celebrated throughout the Muslim world with festivals, family get-togethers and fireworks.

There will be a demonstration by railway workers against railway reforms. The CGT union has called for a 'day of action' including a demonstration at SNCF headquarters. However, the action stops short of a full strike and it is not expected to cause disruption on the railway network.

Macron will travel to Portsmouth in England for the first stage of the commemorations of the D-Day landings. Here's how France will be commemorating the anniversary.

Anniversary of the D-Day landings in Normandy. There will be a series of events to mark 75 years since a combined British and American force stormed the beaches and began the liberation of France. The main event in France will take place in Colleville-sur-Mer in Calvados, where Macron and US president Donald Trump will travel to pay their respects to the fallen.

Paris hosts its annual Diner en blanc. The posh picnic involves thousands of people all dressed in white turning up to a location that is only ever revealed at the last minute. The Diner en blanc will be held somewhere in Paris. Photo: AFP

The Women's World Cup football tournament kicks off. Hosted by France, the opening match is between France and Korea at the Parc des Princes in Paris. Kick off is at 9pm

Festival Art Rock begins in Saint-Brieuc, Brittany. The three-day festival has acts including The Good, The Bad & The Queen, Primal Scream, Charlotte Gainsbourg and Angèle.

Women's final of the French Open at Roland-Garros.

The hot air balloon festival begins in Annonay in the Ardèche département in southern France. Running on Saturday and Sunday, the free-to-enter festival celebrates the legacy of inventors Etienne and Joseph de Montgolfier, who launched the world's first balloon flight in Annonay. Could Roger Federer be on course for another win at the French open? Photo: AFP

Men's final of the French Open at Roland-Garros.

England and Scotland play their first games of the Women's World Cup, they battle each other at the Stade de Nice, kick off at 6pm local time.