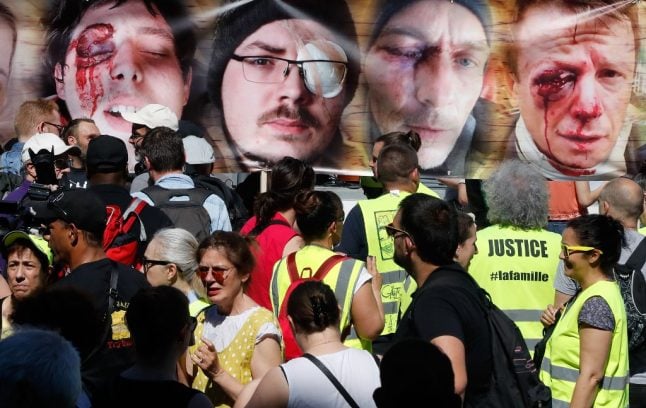 A protest against policing tactics for 'yellow vests'; Photo: AFP

Junior interior minister Laurent Nunez's comments came after a group of people who said they had been mutilated while taking part in the anti-government protests marched through Paris on Sunday.

“We have no regrets over the way that we have handled public order and public safety,” Nunez told broadcaster RTL/LCI. “When there is an attack on the police and there is a proportionate response, yes there can be injuries,” said Nunez.

“It's not because a hand has been blown off, because an eye has been blinded, that the violence is illegal. I'm not apologising, I'm leaving it to the justice system of my country,” he added.

The French authorities have been criticised sharply for their handling of the protests.

Six months after a spontaneous revolt in rural and small-town France began against President Emmanuel Macron, the often violent protests by people wearing fluorescent yellow vests still continue ever Saturday, although the numbers turning out are now greatly reduced.

Nunez described the yellow vest protests as an “unprecedented crisis”, the likes of which France had not faced in 50 or 60 years.

Despite that, he added, “overall, things went well so far as public order is concerned”.

Between 300 and 400 people took part in what they called a “march of the mutilated” in Paris on Sunday, denouncing the police use of stun grenades and rubber bullets.

A number of protesters — and some bystanders — have lost the use of an eye when hit by the rubber bullets, and some people who tried to pick up the stun grenades lost a hand as they exploded. Antoine Boudinet, left, and Patrice Philippe are among those who have suffered injuries on 'yellow vest' protests. Photo: AFP

Overall since the protests began on November 17, 2,448 demonstrators and 1,797 police and gendarmes have been injured during the marches, according to interior ministry figures released on May 13th.

On Thursday, Paris prosecutor Remy Heitz told Le Parisien newspaper that any police involved in unwarranted violence against yellow vest protesters would be in court by the end of the year.

Heitz said there had been more than 170 cases of police violence reviewed, with 57 of them completed and awaiting a decision whether to prosecute.

Nunez on Sunday said very few police officers were under investigation and even fewer such cases were being picked up by the prosecutor to take to court.

“A prosecution does not mean there will be a conviction,” and where there was a conviction, there would be an appeal, he added.

“I have every confidence in the police and the gendarmes of this country… we know that they have used force in a proportionate way in most cases, and force has only been used when it has been in response to violent attacks against themselves or against our institutions.”

The position of the interior ministry had always been that if there had been mistakes made in the use of force, there would be sanctions, he added — but that was in “an infinitesimal number of cases”.

In March, UN rights chief Michelle Bachelet called for a “full investigation” into the possible use of excessive force by French police during the yellow vest protests.