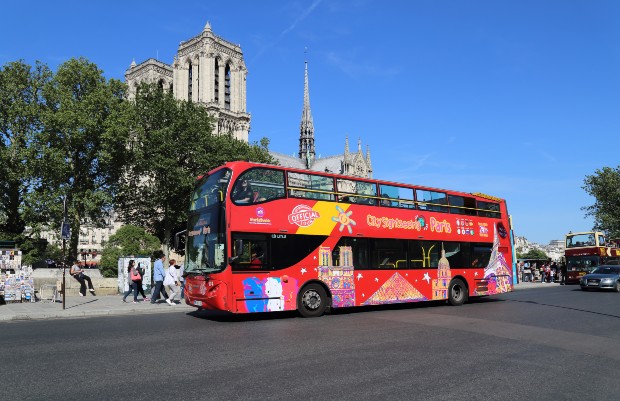 The company has a number of tour buses in Paris. Photo: JanKrakendonk/Depositphotos
The man, 46, has been charged with voluntary homicide and put into provisional detention, a source in the prosecutors' office said, asking not to be identified by name.
The incident took place late on Wednesday on the Quai Voltaire, a road embankment on the opposite side of the River Seine from the Louvre museum.
A verbal clash between the driver of the hop-on-hop-off City Sightseeing Paris bus, which offers tours round the capital, and the car driver degenerated into a physical fight.
Initial investigations found that the double-decker bus hit the car and in a fit of anger the car driver, 55, got out of his vehicle.
The incident escalated and the two came to blows.
Subsequently, “the bus started up and crushed the car driver against another bus,” a source close to the investigation said.
The victim died at the scene.
The tourists on the bus – who were looking on as the scene took place – have been offered psychological help.
While being charged does not automatically trigger a trial under French law, it does mean prosecutors believe there is strong or corroborated evidence of wrongdoing.
The office of Paris Mayor Anne Hidalgo said Thursday that City Sightseeing Paris had no authorisation to operate in the capital.
An official at the city hall told AFP four companies were offering similar services, but only two have a licence to operate.
But the mayor's office wants to shake up the sector to have only electric buses on the routes, which would require all operators to reapply for licences.