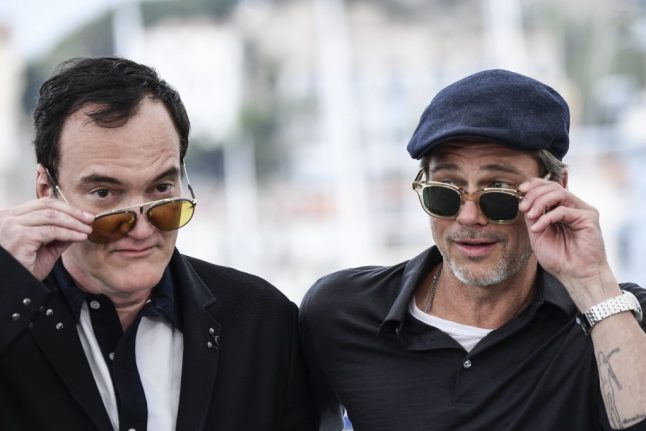 Director Quentin Tarantino (L) and actor Brad Pitt pose during a photocall for the film "Once Upon a Time... in Hollywood" at the 72nd edition of the Cannes Film Festival. Photo: CHRISTOPHE SIMON / AF
With the jury due to begin their deliberations in a villa overlooking the Mediterranean, four films have been heavily tipped by critics as possible winners after a vintage year of top movies.
The Spanish auteur Pedro Almodovar has made the running almost from the start of the 12-day marathon with his most personal film yet, “Pain & Glory”, in which Antonio Banderas plays an ageing gay director not unlike the maker of “All About My Mother”.
Almodovar, 69, has yet to win the Palme d'Or in six attempts but has brought up the big emotional guns this time, with Penelope Cruz playing his mother.
Whether a jury led by the Oscar-winning Mexican tyro Alejandro Gonzalez Inarritu of “Birdman” and “The Revenant” fame will be swayed by such an array of Latin talent remains to be seen.
Nor is there much arguing with the star power of Quentin Tarantino's “Once Upon a Time… in Hollywood”, which brings Tinseltown's two most dashing leading men, Brad Pitt and Leonardo DiCaprio, together on screen for the first time.
Is it Tarantino's year?
Many critics loved the rollicking odyssey through the Los Angeles of 1969 in the period leading up to the Manson family murders, particularly Pitt's performance as a hoary stuntman. But there were haters too, and the French actress Emmanuelle Seigner fired a shot across Tarantino's bows by complaining that he did not consult her husband, director Roman Polanski, whose murdered wife Sharon Tate is at the film's heart.
Tellingly, however, Tarantino — who won the Palme d'Or 25 years ago for “Pulp Fiction” — has stayed behind in Cannes, prompting speculation that he is set for a big prize.
He collected the Palm Dog prize Friday for Cannes' best canine performance at the festival, joking, “At least I do not go home empty-handed.”
Time for a woman winner?
French director Celine Sciamma could make history by becoming only the second woman director ever to win the Palme after Jane Campion in 1993 with “The Piano”.
Like that film, her period lesbian love story “Portrait of a Lady on Fire” is a slow-burner which packs a big emotional punch. As well as being a worthy winner, it could please a jury which has three female filmmakers, the American Kelly Reichardt, Italian arthouse star Alice Rohrwacher and Burkina Faso's Maimouna N'Diaye.
But the competition is stiff, no more so from the Korean master Bong Joon-ho's “Parasite”, a fabulously funny morality tale about the widening gap between rich and poor in his native South Korea. Stellar performances add to its allure though some critics wonder if Cannes will reward a second Asian film dealing with a roughly similar theme after Japan's Hirokazu Kore-Eda won last year with “Shoplifters”.
The movie website Indiewire insisted that outsiders, like Cannes debutants Ladj Ly's powerful look at his own high-rise home in the poor Paris suburbs, “Les Miserables”, and Mati Diop's Senegalese migrant ghost story, “Atlantics”, might just get a foot in the door. Diop has already made history as the first black woman director in competition. Yet first-time filmmakers rarely win Cannes' ultimate prize.
Although Cannes juries are notoriously difficult to call, this one is the most cinephile in years, filled with strong personalities like Greek director Yorgos Lanthimos and the passionate Pole Pawel Pawlikowski. Even its baby, the 21-year-old American actress Elle Fanning, knows her arthouse onions.
So with so many good films in the running, critics are expecting a quality victor. Yet Cannes' winners can sometimes come out of messy compromises, with Almodovar — who presided over the jury two years ago — admitting last week that the most admired film doesn't always win.
Indeed, like German Maren Ade's “Toni Erdmann” in 2016, it can go home empty-handed.