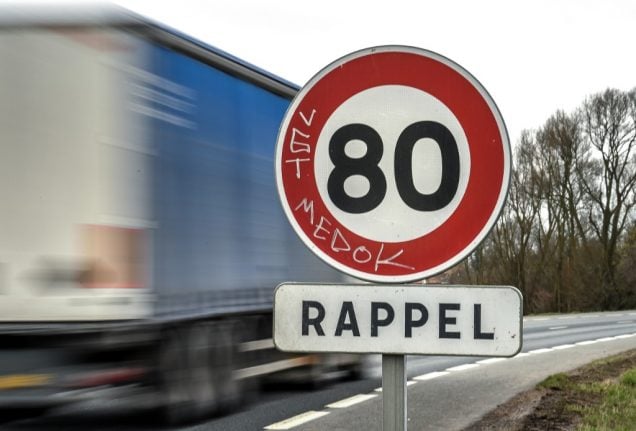 The lowering of the speed limit on secondary roads from 90 km/h to 80 km/h was introduced in summer 2018 and was intended as a safety measure, but rapidly proved highly unpopular.

Drivers in rural areas, where the majority of secondary routes are, saw the new limit as a way for the government to take money from them via speeding fines and the issue became one of the major complaints of the 'yellow vest' movement. Speed cameras became major targets for vandalism and at one time it was estimated that 80 percent of all speed cameras in the country had been vandalised.

Finally the government bowed to pressure, and last week Prime Minister Edouard Philippe announced that the issue would be devolved to local départements.

He told France Info: “If the presidents of departmental councils wish to assume their responsibilities, I have no problem with that.”

But he added that this was on the condition that this must be “systematically accompanied by measures” guaranteeing “the highest possible level of road safety”.

Despite the safety injunction, many local government chiefs have already said that they will be scrapping the 80km/h limit and going back to 90km/h.

In Côte-d'Or, the département president François Sauvadet estimated that “90 percent of the network” of his department “will be able to go back to 90km/h”.

“I don't need injunctions from Paris, neither to define the speed applicable on these roads, nor to receive road safety lessons,” he told French newspaper Le Parisien.

However some have been more cautious. Christophe Guilloteau of the Rhône département said he would not be changing the limit back, saying: “If an accident were to occur in the aftermath, it would be my fault.”

French TV station BFMTV conducted its own research of all of France's 96 départements, asking them what their plans were.

While very few said they were not planning on changing it back, many said only that they were considering the issue, or did not respond at all. The list below is the départements that responded to BFMTV by the time of publication, and indicated that they would be scrapping the 80 km/h limit.

However, before you put the metal to the pedal, you should note that this is only an intention at this stage and – for the moment at least – the 80km/h limit remains in place on all secondary roads.

Before the change can happen, the French parliament must approve an amendment to the loi d'orientation des mobilités, which is unlikely to happen before the summer.