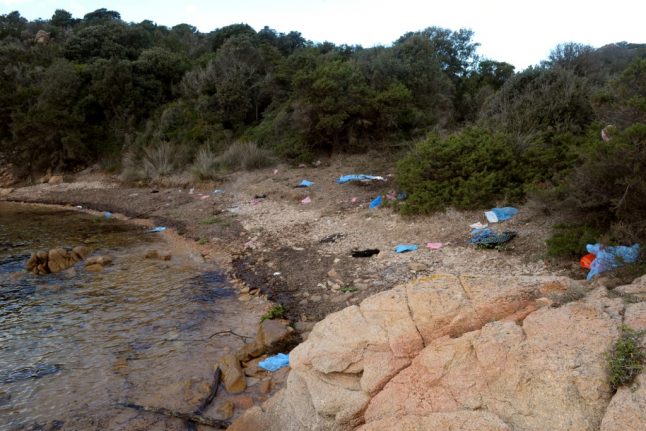 Pollution has long been a blight on the Corsican coastlie. Photo: AFP

The cluster is currently located between Corsica and Elba, the Italian island perhaps best known for hosting the exiled French Emperor Napoleon.

The tonnes of plastic were carried there by currents in the Mediterranean that bore the rubbish north and then deposited it between the two islands, local media reported.

“The risk is that if there are poor meteorological conditions, for example a northeasterly wind in the summer, we will see a massive arrival (of the plastic) on the Corsican coast,” said François Galgani of the Corsican branch of the French maritime research institute IFREMER.

He told France Bleu radio that, due to the local currents, concentrations of plastic were often to be found in the same spot where the “island” is currently located.

Galgani said that unlike the giant plastic clusters that form in the Pacific or in the Atlantic, the one off Corsica was a “temporary accumulation zone” that would last anything from a few days to a maximum of three months.

An estimated eight million tonnes of plastics enter the world’s oceans every year, polluting the waters and endangering species which ingest it.

The dump of plastic waste swirling in the Pacific Ocean is bigger than France, Germany and Spain combined and is growing rapidly, a study warned last year.

Researchers based in the Netherlands used a fleet of boats and aircraft to scan the immense accumulation of bottles, containers, fishing nets and microparticles known as the “Great Pacific garbage patch” (GPGP) and found an astonishing build-up of plastic waste.

Microplastics, tiny fragments of plastic smaller than 5mm in size that make up the vast majority of items in the GPGP, can enter the food chain when swallowed by fish.

The pollutants they contain become more concentrated as they work their way up through the food web, all the way to top-level predators such as sharks, seals and polar bears.