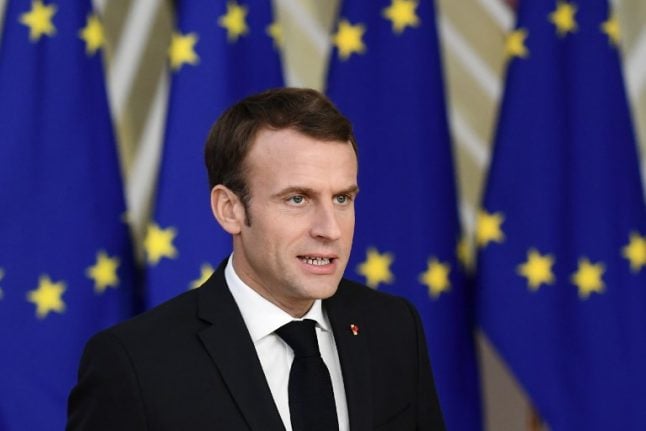 Photo: AFP
“I cannot be a spectator, but a participant in what is the most important European election since 1979, because the union is facing an existential risk,” Macron said in a joint interview published in regional French papers on Tuesday.
But Macron's critics say the head of state has no business taking sides in the European contest, and supporters worry that he might be setting himself up for a fall if his party does badly.
Macron's centrist list is running neck and neck in opinion polls with the far-right National Rally of Marine Le Pen, who is hoping to hobble her rival after losing badly in the French presidential run-off two years ago.
READ ALSO: Late Monday, after meeting with Portugal's Socialist premier Antonio Costa, Macron called for a “grand coalition of progressives” to combat “those who want to destroy Europe through nationalism.”
In the interview he defended his decision to plunge into the high-stakes campaign after supporters worry that he might be setting himself up for a fall if his party does badly.
He also raised eyebrows by appearing alone on an election poster last week, replacing the nominal head of his party's campaign, former Europe minister Nathalie Loiseau.
“He's acting like the head of a clan. It's not his role today,” Jordan Bardella, the head of the National Rally list for the parliament vote, said in a radio interview on Tuesday.
Macron rejected the accusation, saying Europeans were facing a vital choice on how to handle a range of challenges from migration and trade to the growing might of China and increased tensions with the United States.
“The French president isn't the head of a party, but it's normal that he be involved in these fundamental choices,” he said.
At least one paper, the Voix du Nord, boycotted the interview, since Macron's office required a jointly written version of his responses, which had to be submitted for prior approval before publication. Photo: AFP
Abstention risks
The election is shaping up to be a showdown between pro-Europeans and eurosceptic populist parties, but opinion polls show abstentions could exceed the record high of 57 percent in 2014's parliament vote.
“Deciding not to vote means deciding to give a voice to those who would destroy Europe,” Macron said.
“But we can't make Europe advance if there's a Franco-German discord,” he said, referring to signs of a sharp dispute with Berlin in several areas.
Chancellor Angela Merkel admitted last week to “differences in mentality” with Macron and “differences in our understanding of our roles.”
Macron played down the rift, saying: “We respect each other and work very well together, but I don't believe in faked or sterile relations, that we should paper over our differences,” he said.
“If we don't say things, we won't move forward,” he said.