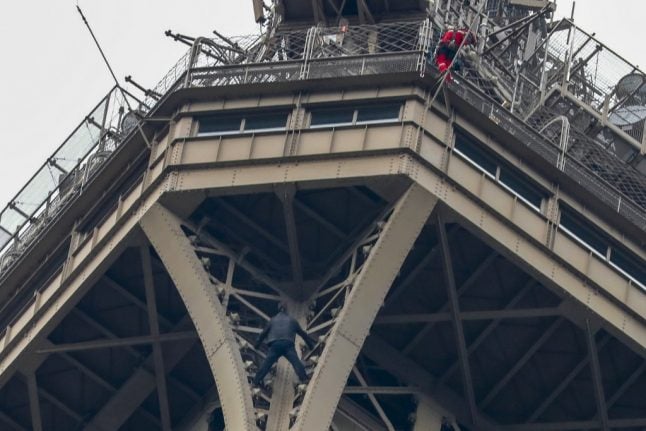 A man (C) climbs up to the top of the Eiffel Tower, in Paris, without any protection as a firefighter (R) looks down at him. Photo: AFP
The man, who was not immediately identified, “is in the hands of the emergency teams” deployed to the tower, which will reopen to visitors as normal early on Tuesday, the company operating the structure said in a statement.
It said firemen who had rappelled down from the tower's third-floor observation deck to near the black-clad climber managed to “talk the individual down”.
The man “has been grabbed,” a police official added.
Emergency procedures triggered by the man's unauthorised climb forced an evacuation of the iconic monument, the esplanade underneath it and a large section of the adjacent Champ de Mars park mid-afternoon Monday.
READ ALSO:

That's one way to celebrate the 130th anniversary of the Eiffel Tower I guess… climbing on it! ? I hope no one gets hurt ? #TourEiffel pic.twitter.com/TO9QIRxuWg

The abrupt closure of one of France's biggest tourist draws frustrated visitors who had been planning to go up the 324-metre (1,063-foot) tower.
“We're really disappointed, we're only here for a week and this messes with our whole programme,” said Sylvie and Celine Forcier from Quebec.
Justin and Karen Smith, from Los Angeles, had been hoping to go to the top of the Eiffel Tower after celebrating their wedding a day earlier in front of the monument. “We're disappointed,” he said.
Police earlier told AFP that, although they had made contact with the climber, they did not know his motive for climbing up its iron beams.
Target for freeclimbers
The tower is often the target of rogue freeclimbers hoping to scale one of the world's most famous structures, often for bragging rights.
But police have also been called in several times in recent years to try to thwart suicide attempts.

In October 2017, a young man ventured out on one of the beams and threatened to jump before police were able to convince him to come back.
In 2012, a British man managed to climb to the very top of the  tower before plunging to his death.
Nearly seven million people a year visit the tower, which last week celebrated its 130th anniversary.
The first two floors can be reached by either elevator or stairs, but only elevators whisk people to the top observation deck.
That did not stop a French urban freeclimber, Alain Robert, from making it one of his first targets in his campaign to scale the world's biggest buildings with no technical climbing gear.
He got to the top — not including the antenna — in the mid-1990s. 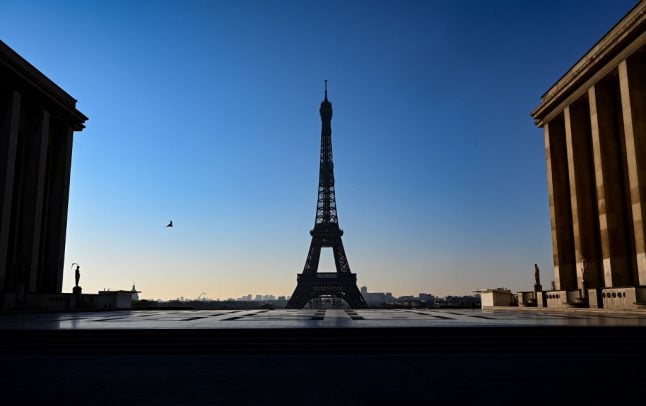 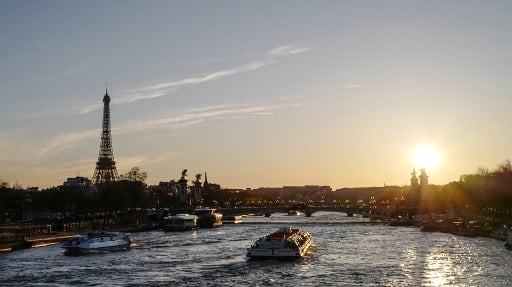