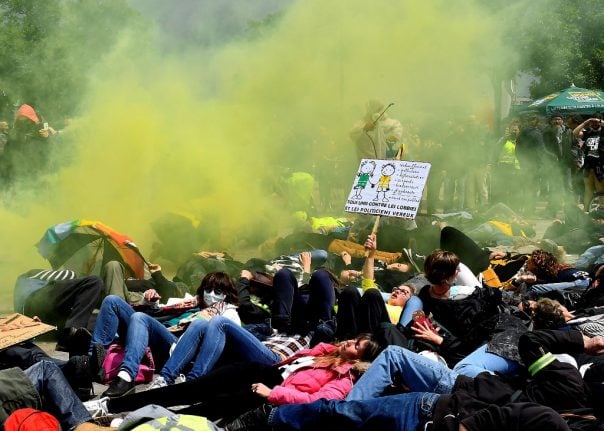 A day after Macron appeared to draw a line under the movement, yellow vest activists — named after the fluorescent gear they wear — marched in Paris and several other cities for the 27th consecutive week.

The count from the interior ministry — routinely dismissed by “yellow vests” — put the numbers across France at 15,500, of whom 1,600 marched in Paris. That was down again from last week's count of 18,600, suggesting a steady decline.

The “yellow vests” own tally put the nationwide total at 41,000.

The numbers were nevertheless certainly down from the massive turn-out at the beginning of the movement, when nearly 300,000 people protested across the country on November 17 in what became one of the biggest challenges to Macron's government.

But many of those who turned out on Saturday were determined to keep going.

“When I hear Macron say that he has done his bit, I can't agree, and that motivates me even more,” said Virginie, an executive secretary marching in the southern city of Montpellier. On Friday, Macron said he felt he had answered the questions raised by the movement and that there was no more to be done politically.

Those who had other ideas about how the country should be governed should run for office themselves, he said. “But democracy is not played out on Saturday afternoons,” he added.

A number of yellow vest activists are on lists for the next week's European elections.

The movement was initially launched over fuel tax increases, but snowballed into a widespread revolt against Macron, accused of ignoring the day-to-day struggles of low-income earners in small-town and rural France.

'We have sown the seeds'

Outside the capital, protesters marched in Reims and Nancy in the east of France, and in Lyon, Dijon, Bordeaux and Toulouse across the south, with smaller rallies in other towns and cities.

In Bordeaux, a few hundred yellow vests joined environmental activists in a march against the agrochemical giant Monsanto, days after revelations that the group kept files on French politicians, journalists and activists.

The group lost its third lawsuit in the United States over the harmful effects of its glyphosate-based weedkiller.

In Reims, the windows of the France Bleu radio station were smashed. Local officials reported the presence of about a hundred hard-core activists, including members of the so-called Black Bloc blamed for much of the violence that has accompanied the demonstrations.

Some 2,000 people marched in Toulouse, one of the strongholds of the movement.

“The government is perhaps going to win this round, but we have sown the seeds,” said Aurelien, a man in his 30s, who said he had been with the movement from the beginning.

The movement had revealed the authoritarian side to Macron's administration and damaged his image abroad, he said.

A number of international organisations, including United Nations' human rights chief Michelle Bachelet, have called for an investigation into reports of police violence during the protests.

For months, yellow vest activists have accused the police of heavy-handed repression of their right to assemble and protest, in particular the use of rubber bullet launchers and stun grenades that have seriously injured dozens of people.