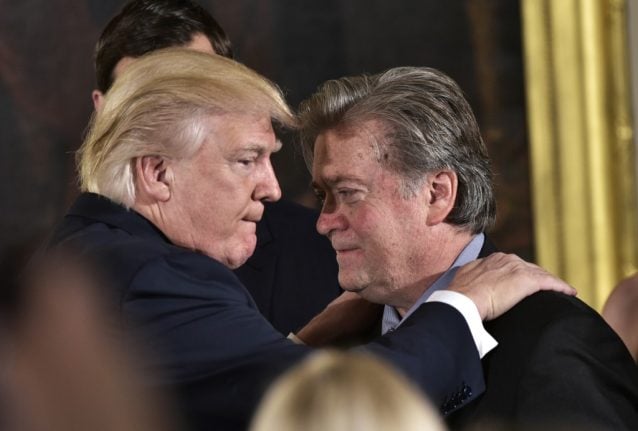 The elections on May 26 in France will see Macron's ruling centrist party face a tough challenge from the far-right National Rally (RN) of Marine Le Pen, formerly known as the National Front.

Should Macron's La Republique En Marche (LREM) party fall behind the RN in the polls, it would be a major blow for the president who supporters see as Europe's centrist saviour against the surge of the far right across the continent.

Bannon had told the newspaper Le Parisien on Saturday he had chosen to come to France as its election was “by far” the most important of all the European parliament polls in EU member states.

He described the poll as a referendum on Macron and his vision for Europe, predicting an “earthquake” next Sunday.

The head of the LREM campaign, Stephane Sejourne, on Twitter accused Bannon of coming to Paris and staying at a luxury hotel with the aim of helping Le Pen's party win.

“It is an attack on the sovereignty of the election… it makes you want to throw up,” he fumed.

Nathalie Loiseau, who heads the LREM list for the polls, commented: “He (Bannon) does not even hide his desire to interfere in our polls.” The number two on the list for the polls for Macron's LREM party, Pascal Canfin, told Cnews that the RN was the “Trojan horse” for Trump and Russian President Vladimir Putin in a bid to destroy the EU.

Canfin said the LREM will also, in an unusual move, ask the French TV channels organising the final election debates this week to have an “anti-fake news” unit in place to prevent falsehoods being spread.

Since his departure from the White House, Bannon has championed the cause of the European far right, having close contacts with Le Pen and Italian populist leader Matteo Salvini.

Salvini on Saturday gathered Europe's disparate nationalists for a unifying rally in Milan ahead of the polls but the gathering was shadowed by the corruption scandal which brought down Austria's far-right coalition.

But senior RN figure Nicolas Bay denied any interference by Steve Bannon in the French campaign.

“We have led this campaign in a perfectly independent way without any foreign or outside influence,” he said.

The election in France promises to be tight, with the latest polls either showing the RN slightly ahead or neck-and-neck with the LREM.

“We should not minimise the consequences” of a victory of the RN in the elections, the head of Macron's party Stanislas Guerini told Challenges magazine, saying it would weaken France in Europe.