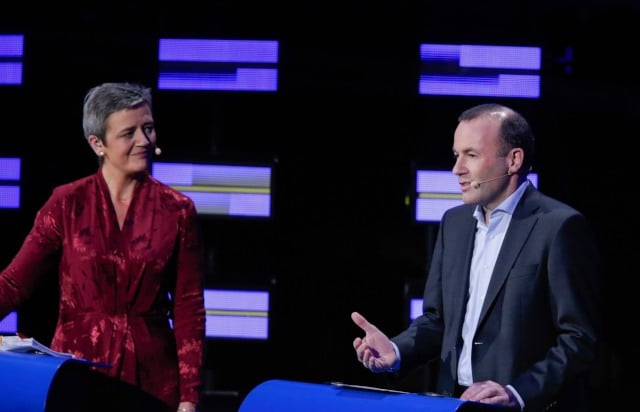 The apparent frontrunner to replace Jean-Claude Juncker as president of the European Commission is German MEP Manfred Weber, the candidate of the EPP, the main centre-right bloc in the assembly.

But Weber's main sponsor, German Chancellor Angela Merkel, is at odds with French President Emmanuel Macron who opposes him, and EU capitals don't want to cede the decision to parliament.

“If Germany doesn't get the Commission because of France, then France won't get it either,” predicted a well-placed Brussels insider, playing down the chances of EU Brexit negotiator Michel Barnier getting the nod.

This could open the door for someone else, possibly the outgoing EU competition commissioner Margrethe Vestager, the former Danish minister and breakout star of the Juncker administration.

If she does get the job she will become the first woman to hold the EU's top post.

Vestager is not a member of the European parliament, but she has been nominated by the liberal ALDE group, which is expected to swell in size and power with the arrival of members from Macron's centrist movement.

This democratic fig-leaf could be enough to quiet supporters of the so-called “spitzenkandidat” process, under which the leader of the biggest group — probably Weber's EPP — should get the prize.

“The chancellor would support Vestager's candidacy, because parliament will insist that the nominee come from one of the political groups,” the senior political source said.

'The lack of understanding is total'

Several parliamentary sources confirmed to AFP that no nominee “pulled from the hat” without having gone through the motions of the spitzenkandidat campaign would be acceptable to the European parliament members (MEPs).

But the eventual president's group would not have to have won the biggest share of seats, as long as he or — this year more likely — she has support on the all-powerful European Council of national leaders.

Until recently, it had been said in Brussels that Barnier might emerge after the elections as a compromise candidate. The respected negotiator is in Merkel's EPP and hails from Macron's France.

But last week when the EU leaders met in the Romanian mountain town of Sibiu, Merkel did not appreciate it when Macron publicly spoke against Weber and against the spitzenkandidat process itself.

“We shouldn't compromise on the least bad candidate,” Macron said, in remarks seen as a swipe at both Merkel's conservative ally Weber and the current Commission chief and former EPP candidate Juncker.

Already, at the previous European summit Macron infuriated his colleagues by his opposition to extending Britain's deadline for negotiating Brexit — with Barnier his only high-profile backer.

After Sibiu, Merkel has admitted in an interview that sometimes she and Macron “wrestle” over issues, and Brussels insiders describe this as a polite euphemism for a “terrible” relationship.

“The lack of understanding is total,” one said.

Among the other candidates for the top EU job are Dutchman Frans Timmermans who leads the Social Democrats' campaign. He is currently the first Vice-President of the European Commission and deputy to Juncker.

More than 400 million Europeans are eligible to vote in a series of parallel elections between Thursday and Sunday, after which group leaders will negotiate new voting blocks in Strasbourg.

But the national leaders will want to steal a march on parliament and impose their own choices for the top jobs — so the European Council will meet almost immediately on May 28.

There, they will launch the hunt not only for someone to replace Juncker at the Commission, but also former Polish premier Donald Tusk as chairman of the leaders' council.

Other prime jobs up for grabs will be those held by a trio of Italians: High Representative for foreign relations, Federica Mogherini, Mario Draghi at the European Central Bank and EU parliamentary speaker Antonio Tajani.

Brussels officials are keen that the senior posts be fairly spread around the continent in geographical terms, and that horsetrading between the leaders and parliament will determine their ideological bent.

But many, including Vestager herself, have insisted that this time women should be given a fair shake.

After the May 28 meeting, Tusk has set himself the task of putting together a list of nominees to be approved at the planned European Council summit on June 20 and 21.

“I will do my best to build more balance than today,” Tusk said in Sibiu.