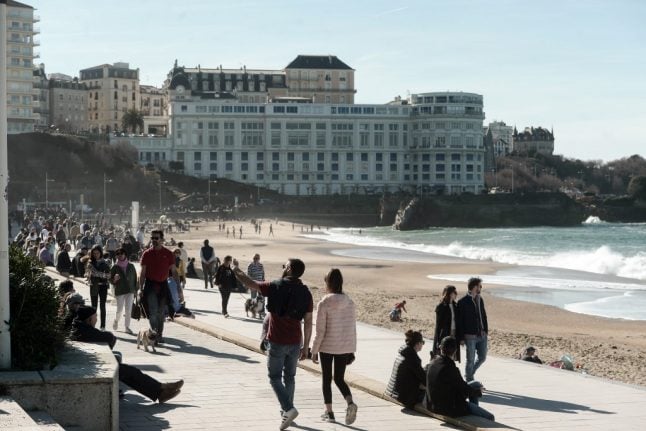 “France remained the world's top destination in 2018,” the government's tourism committee said in a statement.

The total of 89.4 million visitors was a three percent jump from 2017, and France is now targeting 100 million foreign tourists for 2020.

The biggest increase came from Asian visitors, up 7.4 percent from the previous year, though Europeans still make up the bulk of foreign tourists to France, representing 79 percent of the total.

Statistics office Insee had already indicated another bumper year for tourism, saying last month it had tallied 438.2 million nights spent in hotels, campsites and youth hostels in 2018, an increase of nine million from the previous year.

And that figure doesn't include the figures from home-sharing platforms like Airbnb, which has 65,000 listed apartments in Paris alone.

Tourist spending reached a record as well, with a five percent increase from the previous year to 56.2 billion euros, the government said Friday.

It was a sharp jump from the 190 conventions held in 2017, allowing Paris to surpass Barcelona as the most popular destination for industry gatherings, the ICCA said. Officials had worried the weekly yellow vest protests in Paris and other major cities would halt the steady growth in tourism, which has become a huge contributor to France's economy, generating two million jobs.

The Saturday rallies since November have often spiraled into rioting and fiery battles with rampaging protesters, with images of burning cars and looted shops broadcast worldwide.

President Emmanuel Macron's government has deployed massive police forces to contain the violence, with the Champs-Elysees and other key tourist spots often on lockdown to curb the unrest.

The year has gotten off to a rocky start, with international passenger arrivals to Paris airports slumping by five to 10 percent in December, and ticket bookings continuing to fall in the first months of this year.

Last week, Insee reported that the number of overnight stays in tourist accommodations across France fell by 2.5 percent in the first quarter, with the Ile-de-France region encompassing Paris down by 4.8 percent.

“There has been a 'yellow vest' impact in the first quarter,” Tourism Minister Jean-Baptiste Lemoyne told journalists on Friday.

But the government said tourist revenues had nonetheless continued to increase in January and February.