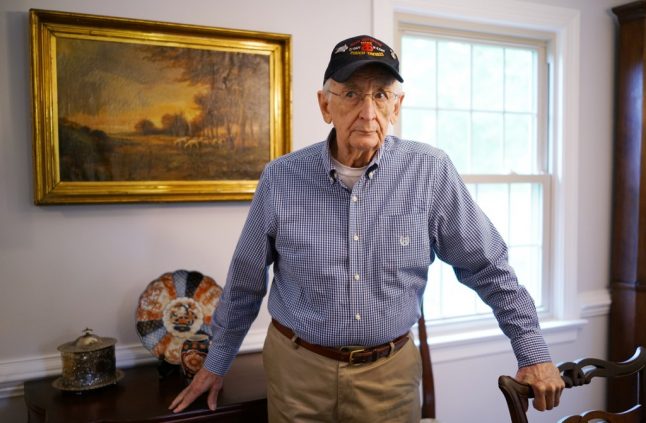 “I was too young. I didn't do anything,” Sisk, now 92 but still full of vigor, told AFP at his home in Lynchburg, Virginia, 300 km south of Washington.

“If you were looking for a hero, you didn't find one,” said the modest veteran of the Allied invasion of Europe 75 years ago.

Herbert “Bill” Sisk was still a high school student when he lied about his age to sign up for the Army in 1943 at the age of 16. Bill Sisk at his home in Lynchburg, Virginia

He was sent to Fort Bragg, North Carolina for basic training that was meant to last four months but which was cut short after just nine weeks.

He was assigned to the 90th Infantry Division of the United States Army and joined 15,000 other troops aboard the Queen Elizabeth ocean liner for a perilous journey across the U-boat-saturated waters of the Atlantic Ocean.

Shortly after landing in Glasgow, Scotland, his unit, the 359th Infantry Regiment, was transferred to the Welsh capital Cardiff, where Sisk was trained as a radio operator.

He was told nothing about where he would be deployed to next.

He landed on the afternoon of D-Day, when the beach had been secured and the dead removed.

“It's not like Omaha Beach. Omaha Beach, they landed on a cliff. They had a cliff in front of them. No, we had open ground. Nothing to worry about,” he recalled.

On his back, he carried an enormous radio set, the forerunner of the walkie-talkie.

Being the youngest soldier in his unit, he sidled up to a group of older men. One of them, carrying a huge machine gun, told him to clear off, worried that the enormous antenna of the radio set would attract enemy fire.

Three days after landing in Normandy, he turned 18.

“I tell everybody I had a big birthday party on June the ninth, that was my birthday, I turned 18. And we had a big celebration: no cake, no candles, no ice cream, no presents, but a lot of fireworks.” Bill show mementoes, including a photo of himself in uniform. Photo: AFP

A sergeant in his unit decided to look after the young Sisk.

“He was about 40 years old. And I was a kid. I was the youngest guy in my unit and he took me under his wing,” he said. “So he treated me like a son.”

His unit was headed for Sainte-Mere-Eglise but the going was slow, with the enemy using the Normandy hedgerows as cover for ambushes.

When Sisk arrived, the village had already been liberated and his unit was sent to Mont Castre, where he was shot in the leg just as he was sitting down to eat his first hot meal in days.

He was evacuated back to England, where he spent four months recovering before rejoining his division, commanded by the legendary general George Patton, near Paris and pursued the retreating Germany army eastward.

The 90th liberated Luxembourg and then took the German city of Frankfurt before moving northeast. There, they discovered hidden Nazi gold in the Merkers mines on April 4, 1945.

Thanks to a friend in the military police, Sisk got to see the stash of looted gold with his own eyes.

But shortly after that, Patton ordered the 90th Division to push on to the east where it came across the Nazi concentration camp of Flossenburg.

The youthful Sisk was shocked by what he saw, but had the foresight to bring a camera with him and snap photographic evidence of starved faces, mass graves and a furnace with an abandoned shoe in front of it.

It was a brutal experience for the young soldier. “You grow up real fast,” recalled Sisk.

Returning to Lynchburg after the war, Sisk went back to school, passed his exams and earned a degree in economics, before finding work at a chain of large stores.

He married, had two children and with the help of the GI Bill built himself the home where he still lives.

Asked why he decided to fight at such a tender age in a faraway country about which he knew very little, Sisk replied, as so many other American war veterans do, with a shrug.

After the attacks on Pearl Harbor, he said, “I don't think we did much thinking at all.”