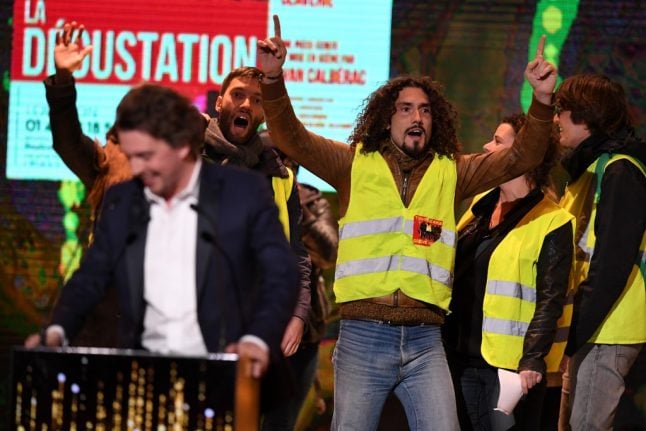 The award ceremony was broadcast later with the protest edited out. Photo: AFP

The ceremony was broadcast on French France 2 public television later in the evening but with a delay and the incident was edited out of the broadcast.

The head of the Moliere ceremony, French theatre impressario Jean-Marc Dumontet, said the protesters had managed to access the theatre via the roof.

They then surged onto the stage, interrupting the speeches of host Alex Vizorek.

“The Moliere for indisputable dishonesty, voted unanimously by the jury, goes to Mr Macron and his government!” said a protester from the lectern, clutching a statuette of Moliere in a yellow vest.

The protesters, who demanded better conditions for freelance workers in the arts in France, eventually left the venue chanting anti-Macron slogans.

Some of the audience – including the great and the good of French theatre – applauded the protesters while others whistled in dismay.

Weekly protests by the yellow vests accusing the government of turning a blind eye to inequality have rocked the Macron government over the last six months.