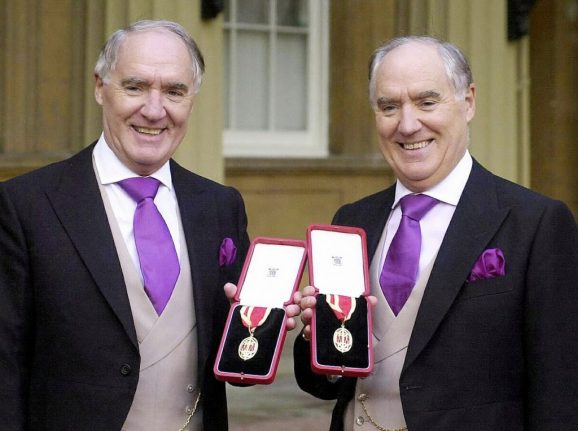 Sir David Barclay (L) and his twin brother Sir Frederick after receiving their knighthoods in 2000. Photo: AFP
David Barclay, who shares along with his twin brother Frederick an estimated fortune of £8 billion (10.4 billion dollars, 9.3 billion euros), is suing playwright Hedi Tillette de Clermont-Tonnerre for violation of privacy and defamation.
The court in the city of Caen was due to hear the case, which was filed in June 2018, from 1200 GMT in a case expected to last several months.
If the court rules in favour of David Barclay, the play could be banned from performance and the theatres that performed it forced to pay damages of tens of thousands of euros.
The play, “Les Deux Freres et les lions” (“The Two Brothers and the Lions”), was performed at the 150-seat Theatre de Poche in Paris up to March 31 this year and was critically acclaimed.
The play does not mention the Barclay brothers directly. But it does not take much effort to see parallels with the pair who built a vast property and media empire after being born into a modest Scottish family.
“The irresistible rise of two Scottish immigrants. This tale tells the rise two twins who came from a poor background to have at the end of the 20th century one of the biggest fortunes of Great Britain,” the theatre says of the play.
According to the latest rich list published by The Sunday Times this month, the twins are the 17th richest people in Britain, with a fortune of £8 billion ($10.4 billion).
'Freedom of expression'
The defence argues the play's aim was to shed light on the continued use of feudal law from the medieval Norman era in the Channel Islands off the northern coast of France, which are self-governing dependencies of Britain.
The brothers live part of the time in a vast mock Gothic castle on the Channel Island of Brecqhou, neighbouring the island of Sark, and are known to fiercely defend their privacy, often through legal action.
Ahead of the hearing, Clermont-Tonnerre, 44, told AFP that “in France there is complete freedom to talk about public figures.
“We are in the country of Voltaire, it is a case of freedom of expression,” he added, referring to the great 18th-century French writer.
He described the case as “extraordinary”, pitting one of the richest individuals in Britain against a “play which played in a small Paris theatre”.
According to defence documents, the playwright only drew inspiration from well known aspects of David Barclay's life and almost all the elements in the play “are all fictional and imagined by the author”.
Tillette de Clermont-Tonnerre “respected a distance between the text and the reality”, it said, emphasising that this was theatre which made clear it belonged to the realm of the story.
“The play reveals no element of the private life of David Barclay,” it said, accusing him of having “excessive sensitivity” and an “exacerbated taste for secrecy”.