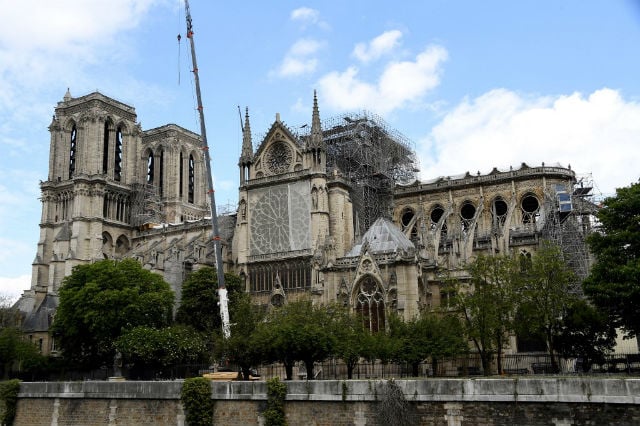 The fire at Notre Dame Cathedral burnt down much of the roof. Photo: Bertrand Guay/AFP
Renovating the 850-year-old Gothic cathedral, whose wooden roof was largely destroyed in the April 15 blaze, will be an unprecedented challenge for the government, which drafted a special bill for managing the huge project.
Images of the ancient cathedral going up in flames sparked shock and dismay across the globe as well as in France, where it is considered one of the nation's most beloved landmarks.
Days after the fire, French President Emmanuel Macron set a target for the restoration to be finished within five years, meaning it should be ready by the time Paris hosts the Olympics in 2024.
But the legislation, aimed at speeding up the construction process, sparked controversy because it would involve removing some of the red tape protecting the ancient structure.
After thirteen hours of debate, the bill was adopted by 32 votes in favour, five against and 10 abstentions. It will now be forwarded to the Senate for further scrutiny scheduled for May 27.
READ ALSO:
As the session opened, Culture Minister Franck Riester told MPs that although five years was “an ambitious timeframe” for renovating Notre-Dame, which took 200 years to build, the project would “not be done in haste”.
“Yes, we want to move quickly. Some have accused us of wanting to move too quickly but the outpouring of generosity was very fast so we can and must respond, which is what we are doing,” he said.
So far, nearly one billion euros ($1.1 billion) has been donated or pledged for Notre-Dame, with Riester pledging that the funds will go “entirely and exclusively” to its restoration.
Experts believe the total bill will come to between 600-700 million euros, with some raising questions over what will be done with any leftover money, suggesting it could be channelled to other crumbling churches and cathedrals.
France's Observatory for Religious Heritage (OPR) says there are between 40,000 and 60,000 churches and chapels in France, 5,000 of which are in a state of dilapidation.
'Precise rules'
The law also outlines the creation of a public body to oversee and carry out the work within a rapid time frame, but more controversially grants the government power to override regulations on planning, environmental and heritage protection and public tenders.
But Riester said the provision would not be used to cut corners.
“There are very precise rules which apply to the restoration of heritage buildings and property which are formalised in the code on cultural heritage and which correspond to France's excellence in this field,” he said.
“It goes without saying that these rules will be applied, I will guarantee it.”
The law does not mention the architectural aspects of the project, with some MPs keen to push through legislation stating that the work will ensure the cathedral is rebuilt exactly as it was without any creative additions.
Notre-Dame has figured as a central character through the ups and downs of French history since construction began in the mid-12th century.
It was vandalised and plundered during the French Revolution in the 18th century, but went on to feature as a central character in a Victor Hugo's 1831 novel “The Hunchback of Notre-Dame” which is credited with helping save it.
It survived the devastation of two global conflicts in the 20th century and famously rang its bells on August 24, 1944, the day of the Liberation of Paris from German occupation at the end of the World War II.