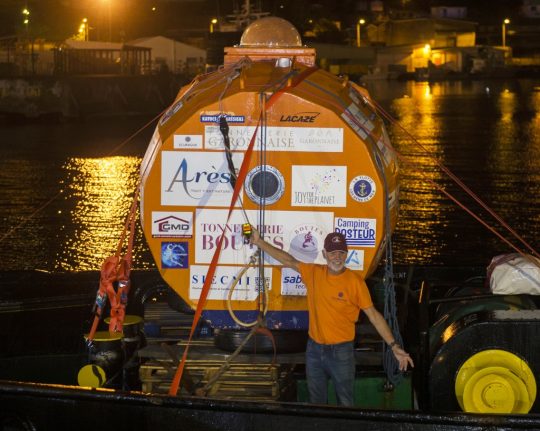 72-year-old Frenchman Jean-Jacques Savin crossed the Atlantic in a barrel in four months. Photo: AFP
“It was an exhilarating voyage but also quite risky,” Jean-Jacques Savin said after embracing his partner Josyane for the first time since he was dropped into the waters off the Canary Islands on December 26.
Savin had already declared his trip a success as of April 27 when he officially entered the Caribbean after 122 days at sea.
Five days later, Savin and his barrel were hauled out of the water by a Dutch oil tanker, after he requested help to avoid being carried to the shores of the United States or another country, which would complicate the return of his vessel to France.
Martinique is one of France's overseas departments and French territory. Photo: AFP
“My first few steps were difficult, it felt like being drunk,” Savin told the roughly 23,000 followers on his Facebook page.
“It was my first hot shower with soap in 127 days… They offered whatever meal I wanted, I asked if it was possible to have two fried eggs.”
After a few days on the Dutch island of Saint-Eustache, a French tugboat brought the barrel and Savin to Martinique.
He lost four kilos (nine pounds) during his trip in the barrel, made from resin-coated plywood, heavily reinforced to resist waves and potential attacks by orca whales.
Measuring three metres (10 feet) long and 2.10 metres across, it gave him about 6 square metres (65 square feet) of cramped living space.
“Frankly, he hasn't lost that much weight,” said his friend Pierre Galzot, also on hand to greet Savin in Fort-de-France,
But as a doctor, Galzot still advised him to “get a full check-up”. Photo: AFP
Book in view
Savin survived mainly on his stores of freeze-dried food and the occasional freshly caught fish, as well as supplies provided by the crews of ships he came across during the voyage.
Most of his days passed smoothly, providing displays of frolicking dolphins and the schools of fish seen through a porthole in the floor.
He nonetheless had plenty to keep him busy.
“Answering emails in the morning, that could take three hours, then fill in my trip log. That took up the morning, and then a nap in the afternoon,” he said.
“I read a lot, also I wrote my book” about the experience, which he plans to publish in August.
But there were a couple of close calls, including nearly being rammed by a cargo ship.
There was also a night of pummelling waves during a storm that threatened to turn the vessel completely upside down. Photo: AFP
After crawling outside to reattach a vertical stabiliser, Savin found himself dangling off the side of the barrel by a rope.
It took half an hour of scrambling to pull himself back up, and Savin later posted pictures of his heavily bruised body.
After resting up with his family this summer, Savin already has another challenge in sight: swimming the English Channel.
He is also playing with the idea of trying to cross the Pacific ocean in a barrel if he can round up sponsors for what might be a six-month challenge.
“Now that I'm not at all in favour of,” his friend Galzot said.
“Jean-Jacques has a good head on his shoulders. He's aware of his capabilities, and his limits.”