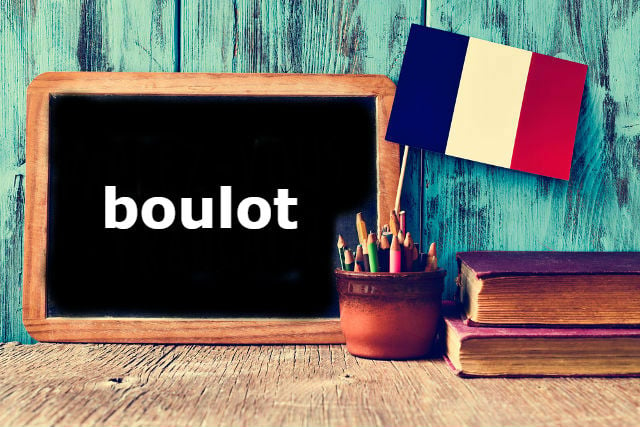 Why do I need to know boulot?

'Métro, boulot, dodo' is a phrase that's hard to escape in France – especially with the current trend for putting twists of the original onto bags, T-shirts and other knickknacks.

It's a great expression for describing the Parisian rat race but 'boulot' is an extremely useful word in its own right.

Here's a look at where it comes from and how to use it, as well as some tips on other French words you can use to describe the daily grind so that you can fit in with your French colleagues.

So, what exactly does it mean?

If you were using it in conversation in France, you might say: Je change de boulot à la fin du mois. – 'I'm changing jobs at the end of the month' or J'ai trop de boulot. – 'I've got too much work on'.

And if you were feeling particularly enthusiastic, you might say: Au boulot! – 'Let's get to work!'

According to most sources, it hasn't been in use for that long despite how common it is today among people of all ages – and it's origins are apparently somewhat ambiguous.
Some suggest it comes from the word bouler (to roll) which then became boulotter (to lead a quiet, predictable lifestyle) before it transformed into boulot as we mean it today.
Another – although apparently less likely explanation for its origin –  is that it comes from bouleau (the same as the French for 'birch' – as in the tree) which is a tough wood to work with, leading to its contemporary meaning, 'hard work'.
But wherever it came from, boulot is far from the only slang word the French use to describe work.
Alternatives
If you're having a particularly tough day, you might use the word besogne instead.
Like boulot, besogne means 'work', 'hard work', 'task' but it can also mean 'slog', 'toil' or 'drudge'.
For example, Cet ouvrier est endurant, il est dur à la besogne. – 'That worker has stamina; he's tough when it comes to hard work.'
If you are struggling with the pronunciation, this link will help you out.
Another French slang word for work is taf which doesn't have quite the negative implication of besogne.
You could use it in the following way: Je suis en retard au taf. – 'Now I'm late for work'.
For more French Expressions and French Words of the Day you can CLICK HERE to see our full list