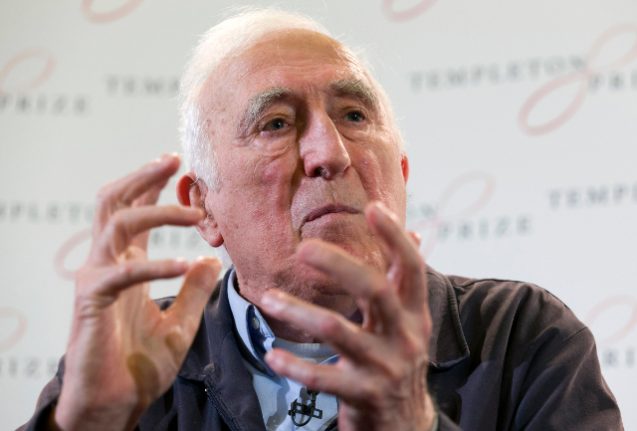 French President Emmanuel Macron on Wednesday lauded the life and work of Jean Vanier, who founded a pioneering network of communities for people with mental disabilities and lived at one of them in northern France until his death this week.

“This great spiritualist and humanist left us a more inclusive and better-shared world,” the presidency said in a statement following Vanier's death on Tuesday.

He was 90 years old and had been fighting cancer for several weeks, according to L'Arche (The Ark), a network of some 150 residential communities operating in around three-dozen countries, with more than 10,000 members.

Vanier, the son of a Canadian diplomat, was an officer in the British and Canadian navies before abandoning the military to study theology in Paris, with the idea of becoming a priest.

But after being shocked by the conditions at a mental institution he visited, he gave up everything in 1964 to live with two mentally handicapped men in the village of Trosly-Breuil in northern France, which quickly attracted new residents.

The concept spread as some of his colleagues went on to establish more centres around the world.

“At the Ark, you start by wanting to help people, and you end up realizing that it's the people with a handicap who change you, who show you another picture of life and humanity,” Vanier told AFP in a 2014 interview.

The next year he was awarded the Templeton Prize, a $1.7 million honour for “entrepreneurs of the spirit”.

Vanier also created in 1971 the Faith and Light network, which now counts nearly 1,500 communities that bring together mentally disabled adolescents and adults along with their families.

In 2000 he founded Intercordia, which offers young people around the world the chance to participate in solidarity projects.

Pope Francis also mourned Vanier as “a man who understood the Christian command” to care for those rejected or marginalized by society.