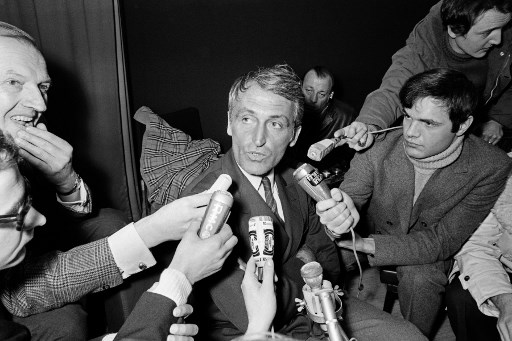 In 1963, Francois Pelou, who also covered the wars in Korea and Vietnam for Agence France-Presse (AFP), was the first French journalist sent to Dallas from New York the day after the assassination of John F. Kennedy.

Two days later, he was an eyewitness to Oswald's shooting by nightclub owner Jack Ruby in the basement of the Dallas police headquarters. Francois Pelou has died at the age of 94. Photo: AFP

Describing the killing, Pelou said he saw “on the chest, on the black sweater worn by Oswald… the small flash of the revolver of his assassin”.

Ruby “knocked into me in order to kill Oswald. He did not shoot to injure, in a fit of anger, but to kill”, he said.

Oswald “was the first to see his killer arrive, which is why I always felt like they knew each other”, he added.

Pelou covered Ruby's trial the following year and was called as a witness by the Warren Commission set up by President Lyndon B. Johnson to investigate Kennedy's assassination.

“Francois died on Saturday at his home in Conques-en-Rouergue,” Pelou's wife Caroline told AFP by phone from the south of France.

In Vietnam, where he met the famous Italian journalist Oriana Fallaci with whom he had a long relationship, he covered the Tet Offensive – the surprise assault launched by the communist north targeting more than 100 cities and outposts in southern Vietnam.

“The bazooka fire shook our building… a few minutes of respite and tacatactac… the AK-47 opened fire straightaway,” he wrote in a despatch.

The offensive eventually prompted the US to withdraw from the war and was a military disaster for Hanoi which lost an estimated 58,000 fighters.

“The American and governmental vulnerability demonstrated after the undeniable Vietcong victory in the first phase of their offensive, is likely to be an important factor in Vietnamese political life. American power has lost its prestige,” he added.

Fallaci dedicated her book Nothing and So Be It on the Vietnam war to Pelou.

“Oriana Fallaci arrived in my bureau in 1967. We covered many events together, she would become very important in my life,” he told Toulouse's La Depeche daily in 2016.

Pelou was left with a lifelong limp after being hit in the leg by shrapnel while in Vietnam.

During his career, Pelou also covered Mexico and Brazil where he was jailed for having revealed the details of a ransom deal under which dozens of political prisoners were freed to secure the release of a kidnapped ambassador.

He was expelled in December 1970 for “activities contrary to national security”.

Posted to Madrid in 1975, he was among the first international journalists to announce the death of dictator Francisco Franco who had ruled Spain with an iron fist from the end of the country's civil war.