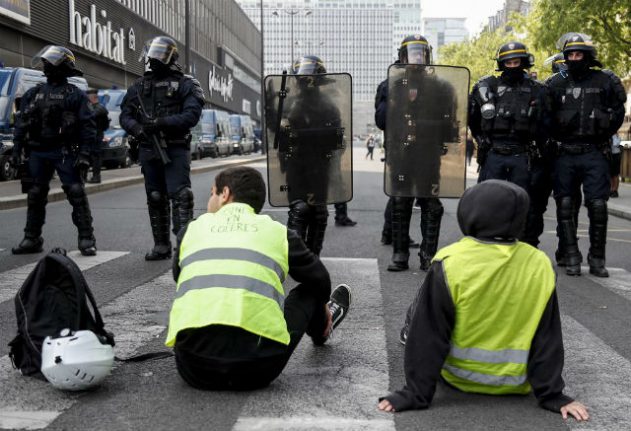 The video shows arrested man being pinned down by police officers. Photo: Zakaria Abdelkafi / AFP
The man attacked with a telescopic truncheon had been plucked from a crowd of protesters, many of whom were chanting “everyone hates the police”.
Paris police chiefs have asked the IGPN, the body that investigates police abuses, to investigate the incident, which happened when the arrested man was pinned down by other officers.
They are also looking at two other incidents caught on video. One shows a helmeted officer hitting a protester while the second shows another officer hurling a paving stone at protesters.
READ ALSO: Investigation after Paris police officer apparently hurled paving stone at protesters
On Friday, French Interior Minister Christophe Castaner told journalists: “If someone is at fault, there will be a sanction, legal and administrative sanctions.”
The traditional May Day workers' march took place in an already tense atmosphere, given the weekly “yellow vest” protests in Paris and other French cities over the past six months.
Clashes occurred even before the march got underway and continued throughout the day.
For months, yellow vest activists have accused the police of heavy-handed repression of their right to assemble and protest, in particular the use of rubber bullet launchers that have seriously injured dozens of people.