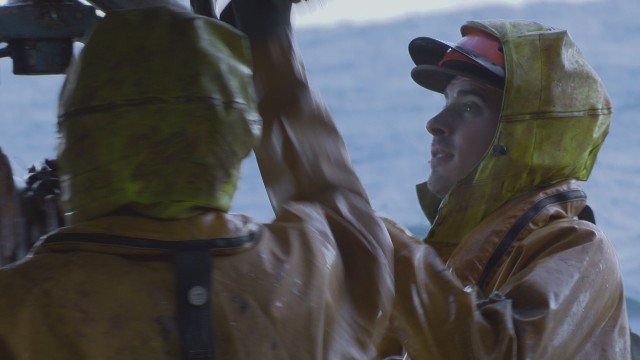 A still from the film Wait&See, about the impact of Brexit on the British and French fishing industries

My name’s Simon and I’m French. It was never the plan, but on June 23rd 2016, the country where I was born decided to leave the European Union. That meant I’d lose my European citizenship and with it the automatic right to live here with my wife and kids.

I didn't feel I had any other option. I had no confidence whatsoever that the UK government would look out for me. Like countless others of the million or so UK nationals who've lived elsewhere in the EU for more than 15 years, it hadn't even let me vote in the Brexit referendum. So at the end of 2017 I received my first French passport.

It felt like Brexit was trying to rip me in half. I talked a lot about it with my friend Antoine Tracou, a film-maker like me and he suggested we make a film together about the real, human links between people living on both sides of the English Channel and how Brexit could affect them.

But which film? What is it that both unites and divides the United Kingdom and Brittany? The sea of course. So we hitched a ride on a fishing boat in the port of Guilvinec in Finistère, south Brittany and headed across the English Channel to Newlyn, in Cornwall, UK.

Brittany is one of France’s major fishing regions. Boats based in ports here spend a huge amount of time catching fish in UK waters. Without this access many could go out of business. Across the Channel, UK fishermen voted massively to leave the EU, furious at European rules that allow foreign boats to catch more fish than they can in their own seas.

But, in a perfect Brexit paradox, around 80 percent of catches landed by UK boats end up on French or Spanish dinner tables.

Antoine and I chose to concentrate on the fishing communities in Gulivinec and Newlyn. Boats from both ports spend much of their time fishing in the same dangerous seas, between Cornwall and Brittany.

These are people who do the same jobs. They have the same fears, the same hopes, the same destinies. For over forty years they have been working side by side under the same shared rules. Brexit would change all that. We wanted to find out how.

We set out to meet, talk and above all listen to people on both sides of the channel. We didn't want to point fingers or judge. There seemed to be more than enough of that kind of thing going on elsewhere.

So over a year in 2018, we did just that. We spent two weeks at sea and countless hours on quaysides, in cafés, fishing companies and fish markets on both sides of the channel just chatting, listening, getting to know people.

It was a hugely enriching experience and we were welcomed warmly and sincerely wherever we went. It quickly became clear to us that there's nothing more like a Breton fisherman than a Cornish fisherman.

Although fishing remains a very masculine world, we also met two deeply inspiring women during our travels – Soazig Palmer Le Gall in Guilvinec and Elizabeth Stevenson in Newlyn. Both manage fishing fleets of a dozen boats and are hugely important figures in their local economies and communities.

Our time with Dave Stevens, the burly, generous, straight-talking Cornish skipper who welcomed us aboard his trawler the Crystal Sea for eight days, helped us understand why so many UK fishermen like him voted to leave the EU. Looked at from Dave's point of view, EU rules that allow non-UK boats to catch more fish in UK waters than he can, certainly seem unfair.

Where things got more complicated was around the question of who's responsible for that state of affairs, London or Brussels?

Dave is convinced that the UK has been continually out-manoeuvred in fishing talks in Brussels by its more wily EU counterparts. Elizabeth Stevenson saw things differently. She told us fishing, which represents around 0.5 percent of the UK's GDP, has always been used as a bargaining chip by London to get concessions in other areas.

In one memorable discussion she remembered how she had once been to see a UK fisheries minister to complain about her industry's woes only to be told, “fishing is less important than biscuits and lawn-mowers.”

We also found in Newlyn that people, like Elizabeth, who have to consider where catches will be sold after they have been landed tended to be against Brexit. The EU remains by far their biggest market.

One of the things that Antoine and I are most proud of was that we managed to bring people from Newlyn and Guilvinec together. When we were aboard the Crystal Sea, we invited Dave to meet and talk with Soazig, the French fleet manager. He gamely agreed and at the end of 2018 he came to France for the first time in his life.

His warm, frank, respectful meeting and discussions with Soazig end the film. What struck both Antoine and I afterwards was that Soazig and Dave pretty much agreed on everything when it came to the EU’s failings. Their only real difference came over how to deal with them. To change things is it better to stay or leave?

Since the film was released, Elizabeth has also asked to get in touch with Soazig.

Our journeys back and forth across the Channel confirmed one thing to both Antoine and me. If Brexit is first and foremost a British affair, we’d be making a huge mistake if we thought it had no bearing on this side of the Channel.

Europe’s in a bad place. Not the people's Europe. I believe more strongly than ever in European unity, in the power of bringing people together. That's what allowed Dave and Soazig to find common ground.

But the European Union, with its opaque, distant and autocratic institutions must change, or it will disappear.

We need to talk.

Wait&Sea was first broadcast on French television channel France 3 Bretagne on 8 April 2019. It is 52 minutes long and was co-produced by France 3 Bretagne and Aligal Production, with support from the CNC, the region of Brittany, the Procirep and the Angoa.

Simon and Antoine are now putting on a series of screenings of the film – if you would like to arrange a screening for your local area, contact them here in the screening/projection section.