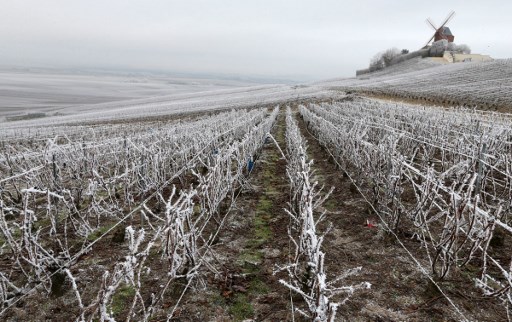 Vineyard owners are being warned about frost over the weekend. Photo: AFP

Rain is forecast overnight into Saturday, but northern areas including the Aisne, the Somme, the Oise and the Nord could also see some snow. Snow is forecast in several parts of the country overnight on Sunday. Image Météo France

Snow showers are also forecast in the Ardennes and at low altitude, from 600 metres, over the Vosges and the northern Alps.

In the south, temperatures will be much milder, between 12C and 20C.

However strong winds are forecast for Sunday, with gusts of up to 90 to 100 km/h in the Rhône Valley.

In bad new for farmers, there are also expected to be some ground frosts until temperatures start to climb again from Monday.