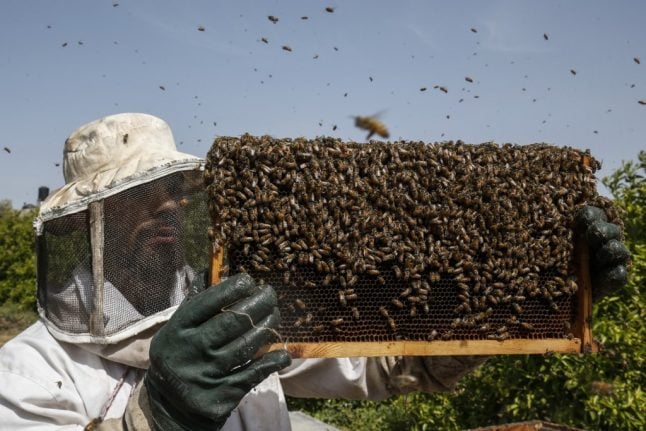 File photo: AFP
“Without bees, no pollinization, no apples, no life,” sums up farmer Alexandre Prot, who decided to deal with a decline in bee populations by becoming a beekeeper as well.
“We are not worried about the lack of bees because we have our own,” he said, during a tour of his 30 hives, which are backed up by another 30 that he
hires during spring months to ensure his 60 hectares (150 acres) of apples are fertilised.
Prot initially took a business degree to work as an auditor on the New York and Paris commodities markets before coming back to his family's 300-hectare apple and grain farm in Chevreville, about an hour north of the French capital. File photo: Apple orchard in France
'Autonomous'
His grandfather, who planted the first apple trees, and his father both called on professional beekeepers to ensure the orchard was properly pollinated.
“Having bees lets me be autonomous with respect to my apple crop,” he said.
“Each year, the hives divide in two, the young queen finds a new home, and we recover the swarms” of worker bees and drones.
“So every year we enlarge our population.”
Prot recovers 500 kilos (1,100 pounds) of honey per year, which he sells in the farm's store.
But it is almost a derivative product because the pollinization is the farmer's main motivation.
The national apiculture institute, ITSAP, estimates that the value of the work done by bees in helping pollinise the fruits, cereals and vegetables from the plants and trees of French farmers is two billion euros ($2.2 billion).
The UN Food and Agriculture Organization (FAO) has made the conservation and sustainable use of pollinators an absolute priority in dealing with a pollinization crisis that threatens global food resources.
The FAO estimates that almost 35 percent of agricultural production worldwide depends on pollinators such as bees, birds and bats, which improve yields on the 87 most cultivated food plants. Photo: AFP
Yarrow and calendula
In France, the number of farmers who have installed their own beehives to support crops is not known, said Eric Lelong, head of the recently created trade association, InterApi.
He nonetheless believes that it is “indispensable to put a value on pollinization”.
In California's almond groves, output can fall sharply unless beehives are brought in, “which explains very high prices for hive rentals,” he noted.
Prot looks after his worker bees closely therefore, sowing fields of flowers, yarrow, calendula, linen and white clover near the hives.
“Since they don't all bloom at the same time, they constitute a pantry for bees from May to October, when there are no more apple blossoms.”
Though the average rate of bee colony collapse in France rose to 30 percent in 2017-2018 owing to humid conditions and attacks by Varroa mites according to the agriculture ministry, Prot says that he did not lose a single colony.
'Let nature do its work'
The farmer has chosen to produce apples under an “eco-responsable” label, as have 65 percent of all apple farmers in France.
Situated between wholly commercial production methods and organic ones, the method provides for stable output from one year to the next, which is necessary to obtain contracts with major distributors, while it reduces the use of pesticides.
“The approach is to let nature do its work, as much as it can, while not ruling out interventions” if the crop is threatened by mould or pests, Prot said.
Use of crop protection products or chemicals such as copper or sulphur must take place while bees are asleep in their hives.
Before reaching that point, farmers who keep bees use other methods aimed at “orienting” natural processes, such as installing “insect hotels” in orchards so that wild drones passing through can help pollinate flowers.
Nests for birds that eat insects and worms are another tool, as are perches for raptors that eat mice and voles which damage apple tree roots.
To thwart night butterflies whose larva infest the apples themselves, Prot resorts to “sexual confusion” by spraying female pheromones that disorient males who cannot find the mates they expect and do not therefore reproduce.
That means no larvae, no worms in the apples and no need for pesticides.