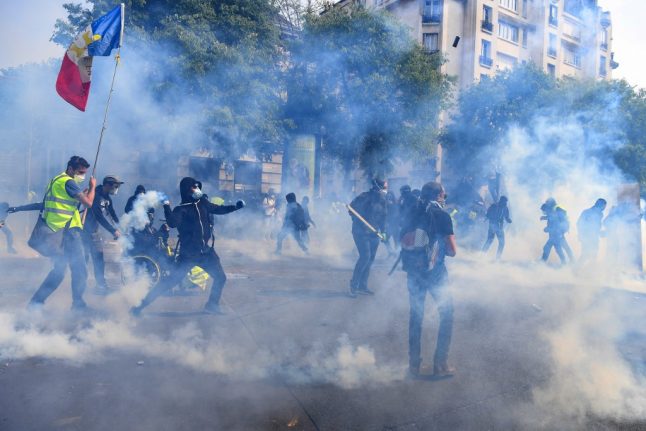 Update 6pm: 288 arrests, 15,000 security checks in Paris. Looting, vandalism and clashes between protesters and police continue in the capital.

A police station in the city's 13th arrondissement has been surrounded by protesters shouting “the police are our enemy”. Officers responded by using tear gas and quickly set up high barriers to secure the station.

Update 5pm: The number of arrests in Paris currently stands at 250.

Philippe Martinez, secretary general of France's nation trade union group CGT, has accused police in the capital of “charging against unionists who were clearly identifiable” as that, rather than the hardline 'black bloc' protesters who are provoking police and causing damage to public property. Paris police have already responded by denying the claims on Twitter, arguing that “trade unionists have never been the target”.

“We are here to organise these demonstrations, not to ensure security”, he told BFMTV.

“What's happening in Paris is not a reflection of all the marches, there were 225 today, and everywhere in France it went well.” In Paris they number 20,000 according to stats released by the French government, but the CGT puts the figure much higher: 55,000 protesters. “It's a protest by workers who are telling the government and the President they must change their policies”.

Update 3pm: 200 people have now been arrested around Paris's Montparnasse neighbourhood, 148 of whom have been remanded in custody. Police have performed more than 12,400 checks on protesters.

Paris riot police fired teargas as they squared off against hardline demonstrators among tens of thousands of May Day protesters, who've flooded the city in a test for France's zero-tolerance policy on street violence.

VIDEO: ?? Clashes have broken out in Paris between police and “black bloc” protesters who joined “yellow vest” demonstrators at the front of the march before the official start of the trade union demonstration on #MayDay #LabourDay #1erMai pic.twitter.com/Cp6c14CiXk

Tensions are palpable as a heady mix of labour unionists, “yellow vest” demonstrators and anti-capitalists gather in the French capital, putting security forces on high alert.

Update 2pm: 165 people have been arrested during May 1st protests in Paris. Police have carried out a total of 9,016 security checks on protesters.

By 11am, Paris police had arrested 35 people. By midday, the number of arrests had gone up to 88, with more than 3,700 checks carried out by security forces in the capital.

Clashes erupted on Montparnasse Boulevard, where hundreds of anti-capitalist “black bloc” activists pushed to the front of the gathering crowd, hurling bottles and other projectiles at police, who fired tear gas and stingball grenades, an AFP correspondent said. The first clashes between riot police and protesters in Paris started at around 1pm, with numerous hooded and masked troublemakers spotted in the crowd.

Vavin Metro: Riot police walked back 20 meters from the protesters. Tear gas is hanging in the air. #1erMai #GiletJaunes pic.twitter.com/m0l3pfqETO

They are likely to belong to 'Black Bloc', an anarchist group which tends to bring violence and destruction to any protest it takes part in. One of the two events planned for the French capital is dubbed “the ultimate act” , with the 'yellow vests' planning to take to the streets along with the 'Black Bloc'. The biggest group of gilets jaunes has gathered around the Montparnasse district of Paris, soon to be joined by another crowd making their way there from Place d’Italie.

In the northern city of Lille, police have used tear gas against a group who according to reports were shouting “Macron, we're coming to get you”.

The Mariannes, the often bare-breasted protesters who dress up as the symbol of the French Republic, have also joined one of the May 1st marches in Lille.

France's far-right Front National (FN) party founder and former leader Jean-Marie Le Pen has also made a May 1st appearance, delivering a speech at the Place des Pyramides during a rally in honour of Jeanne d'Arc.

“Let's have the courage to be nationalists,” he told the crowd, adding that there are “serious social and political dramas” to come because of “these migratory currents that gradually change our country.” In the southern city of Toulouse, a march made up more than a thousand of climate change protesters and “yellow vests” are making their way through the streets of la ville en rose. Local media hasn’t reported any trouble so far.

According to local Lyon media, there have some clashes between police and protesters during a mainly peaceful 4,000-strong march in the eastern city.

In Nantes in western France, another march made up of several thousand protesters has started without any violent incidents.

French Interior Minister Christophe Castaner on Tuesday said more than 7,400 police and security forces would be deployed in Paris for Wednesday's May Day marches in case of violence by protesters.

Las year the government was caught off guard by some 1,200 trouble-makers who ran amok in the capital, vandalising businesses and clashing with police. Only 109 of them were remanded in custody.