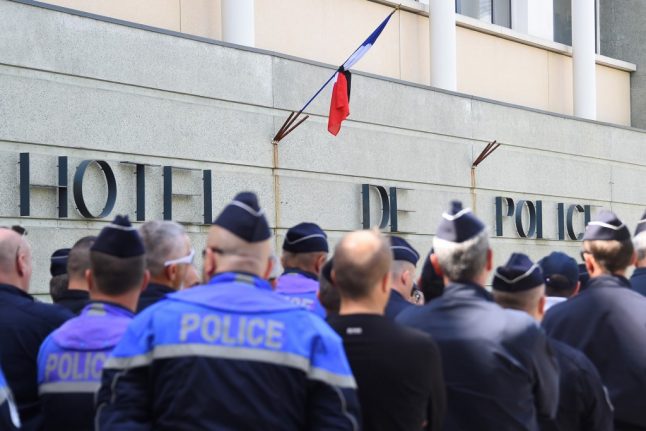 French officers pay tribute to a colleague who took their own life. Photo: AFP

The move comes as prosecutors are investigating chants by some “yellow vest” anti-government protesters in recent weeks urging the police to “commit suicide,” which have prompted widespread public outrage.

Police unions say officers are under intense strain since the eruption of the protests last November, which have often degenerated into violent clashes between demonstrators and security forces.

So far this year 28 officers have killed themselves, up from a total of 35 for all of last year, according to interior ministry figures.

“We have to break the fear, break the shame, break the silence,” Interior Minister Christophe Castaner said as he opened the prevention unit's offices in Paris.

He said officials would also evaluate practices and procedures in the police forces of other countries as well as in private companies.

Castaner acknowledged that police suicides were linked to the physical and emotional tolls of the work, which union officials say have increased significantly with the demands of securing the “yellow vest” protests.

“I don't want to hear more about 'this has nothing to do with the service, it was a personal issue',” he said.

But Castaner rejected claims that a move to let officers keep their service weapons at home when off duty, implemented after the deadly 2015 terror attacks in Paris, had contributed to the increase in suicides.

“Over the past 10 years, the percentage of gun use in cases of suicides hasn't changed,” he said.

National police chief Eric Morvan had already raised the issue in a letter to France's 150,000 officers earlier this month, acknowledging there had been a “dramatic sequence” of suicides in the force.

“The human responsibility that someone has in taking this terrible decision does not exonerate us from ours,” he wrote.

In two of the most recent cases, a policeman killed himself this month at home with his service weapon in Villejuif outside Paris, and a female captain shot herself in her office in the southern city of Montpellier.