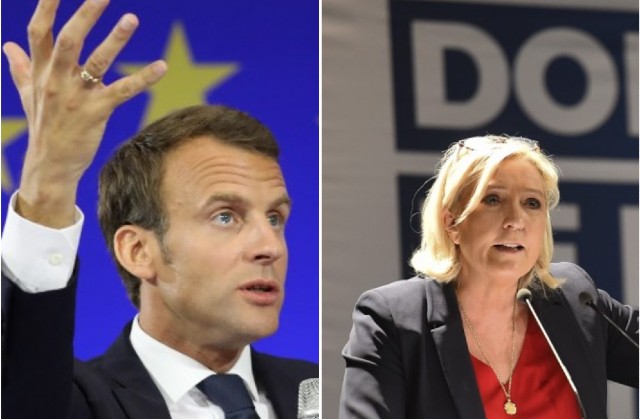 Euro enthusiast Macron and Eurosceptic Le Pen will fight it out at the ballot box. Photos: AFP

How can I vote?

All EU citizens are entitled to vote in either their home country or the country where they live. Registration for voting has now closed in France, but if you are already registered you can vote. British citizens can still register to vote in the UK if they are not already registered, but will need to hurry up as registration closes on May 7th. Find out how to register in the UK here.

How does the voting process work?

This year for the first time, France has adopted the 'whole country' system, instead of the eight constituencies that previously covered France. This means that instead of voting by constituency, voters in France vote nationally, and the parties with the largest numbers of votes get the most MEPs. It also does away with the concept of having a 'local MEP' but means a more direct form of proportional representation, and means that voters across the country can vote for any of the parties that are standing – not just the ones that have fielded candidates in their area. Unlike in French presidential elections, there is only one round of voting.

How many MEPs will France elect?

That is a slightly vexed question. At present, France has 74 MEPs. When Britain leaves the EU it will obviously lose all of its 73 MEPs. The European Parliament had decided to scrap most of those seats and have a slightly smaller parliament (down from a total of 751 MEPs to 705) but some countries are going to get a slight increase in the number of MEPs to smooth out historical differences over population representation. France is going to be one of the beneficiaries of this with an extra five seats. As Britain was originally scheduled to leave the EU on March 29th, these changes were expected to be already in place for this election.

However, thanks to the latest Brexit extension Britain will almost certainly be involved in the European election on May 26th (unless the British parliament manages to agree upon a deal in the next four weeks) so the number of MEPs per country stays the same, for the moment.

All MEPs in France will be elected on the list system. Each party puts forward a list of candidates in order of preference. The number of MEPs it then gets depends on the number of votes it gets. So people who are number 1 and 2 on the list of the bigger parties are virtually guaranteed a seat. What are the big issues in France?

Perhaps unsurprisingly after weeks of 'yellow vest' protests, the high cost of living in France is the number one issue for voters. And it is a worry that Macron is likely to be able to capitalise on, with his recently announced tax cuts and boosts to pensions.

Polling by the European Council on Foreign Relations shows that the cost of living is by far the biggest concern of French voters – with almost 40 percent of people saying that was the most important issue to them, way above the European average of just under 20 percent. The second biggest concern in France was immigration.

In a country blighted by terror attacks, terrorism and Islamic militancy is another big issue for voters, and one that is likely that far-right parties such as Marine Le Pen's will try to capitalise on. When asked what is the single biggest threat to Europe today, 26 percent of French people said Islamic radicals. Migration was named as the next biggest threat, followed by economic crisis and trade wars, nationalism in Europe and climate change. Bringing up the rear with around three percent of the vote was Russia.

Although Brexit is the big issue on the minds of British people living in France, it has not registered as a concern among the French electorate at large. Who can I vote for?

There are nine parties officially registered to field candidates for the European elections in France. Because of the one constituency rule, you are not limited to which party is fielding candidates in your constituency – everyone can vote for whichever party they choose.

The nine parties are:

Les Républicains run by Laurent Wauquiez. With a total of 19 MEPs this is currently the largest French group in the European Parliament, but it was also the party heavily defeated by Macron's new La Republique En Marche group in the most recent presidential elections. Who is tipped to win?

The European elections in France are widely expected to be largely a two-horse race between Macron's La Republique En Marche and Le Pen's Rassemblement National – a replay of the 2017 presidential election in fact.

Heading the list for Macron's party is France's former Europe Minister Nathalie Loiseau, who resigned her post in April to concentrate on the European campaign. A career diplomat before entering parliament, she is an experienced politician who spent the past two years handling France's side of the Brexit negotiations.

By contrast, leading the list for Le Pen's party is a political novice – 23-year-old Jordan Bardella, who has never held any public office.

Because of the way the voting lists work, Loiseau and Bardella, who are both number 1 on their respective party lists, are virtually guaranteed a seat.

This year Le Pen herself is standing for election, but has placed herself second last in the party's list of 78 candidates, making it highly unlikely that she will be returned to the European Parliament.

Polls currently put Macron's party at 21 to 23 percent, just ahead of Le Pen's party, but with a month to go until polling day it is far from a sure thing.

And when is it?

Voting runs over four days from May 23rd, but in France, polling day is on Sunday, May 26th.