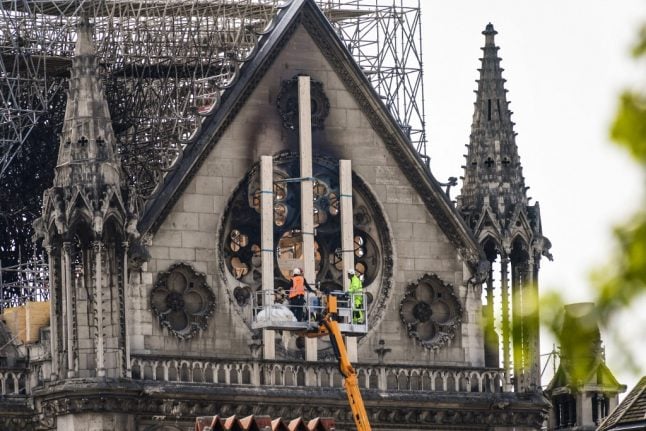 “There were colleagues who from time to time broke the rules and we regret it,” a spokesman for scaffolding company Le Bras Freres told AFP, before adding: “in no way could a cigarette butt be the cause of the fire at Notre-Dame”.

Spokesman Marc Eskenazi said some workers “had admitted in front of the police that they did smoke from time to time,” confirming a report in the satirical newspaper Le Canard Enchaine.

The company Parishad a strict ban on smoking up the scaffolding, which was erected around the steeple as it underwent major renovation to restore its lead covering and joints.

Notre-Dame's now mostly-destroyed roof was made of wood, and included some of the original beams erected in the 12th century. But given the height of the structure, and the time it took to come down from the building site, some workers ignored the rules, Eskenazi explained.

He dismissed the idea of a cigarette starting the fire, saying “anyone who has ever tried to light a fire at home knows that it is not by putting a cigarette butt on an oak log that anything happens.”

French investigators have already interviewed the site workers and other witnesses and are now trying to find the origin of the fire at one of Europe's most visited monuments.

'No problem' in the lift motors

There has been media speculation that a short-circuit on one of the temporary lifts built into the scaffolding and used by workers might be responsible.

The motors “posed no problem”, Eskenazi said, adding: “In any case, they are far away from the steeple and it has been established that the fire started inside the building.”

Climbers were brought in on Tuesday to unfurl tarpaulins over the gutted structure to protect it from rain which is expected in Paris in the coming days. French authorities are worried that the surviving part of the roof and the famed vaulted ceilings could suffer further damage, sparking a race to erect a temporary protective cover.

Images of the ancient cathedral going up in flames on the night of April 15 sparked shock and dismay across the globe and in France, where it is considered one of the nation's most beloved landmarks.

Tourists and French people have since flocked to the banks of the river Seine to observe the disfigured monument whose famed stained glass windows, towers, bells and most of its artworks and relics survived the blaze.

Firefighters and engineering experts have been working to erect scaffolding and other wooden supports to save the structure's stonework from collapse.