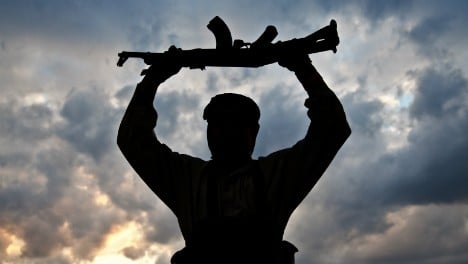 Photo: AFP
The Council of State, which acts as legal adviser to the French government and top arbiter of administrative cases, said it did not have jurisdiction to decide the matter.
After looking at four such requests on appeal it ruled that such a move would require “negotiations with foreign authorities or an intervention on foreign soil,” which was beyond its remit.
France and other European nations have been wrestling with how to handle the hundreds of foreign fighters and their families, many of whom are being held in camps by the Kurdish-led Syrian Democratic Forces which led the final push against IS in Syria.
The issue is extremely sensitive in France, where a deadly 2015 attack on the capital claimed by IS killed 130 people. Photo: AFP
Tuesday's legal decision follows comments by French Interior Minister Christophe Castaner earlier this month that “no communal repatriation” would be considered, but France would study “case-by-case” whether to allow children of jihadist fighters to return.
Three of the four cases considered by the Council of State involve French women linked to Islamic State who are currently being held, with their eight children, in a camp in Syria. The other was lodged by an uncle trying to have two children aged two and four repatriated from another Syrian camp under Kurdish control.
Such cases “cannot be detached from the management of France's international relations,” the court said, confirming an earlier decision by a lower court.
Nabil Boudi, lawyer for the uncle of the two young children, slammed the decision as “a denial of justice”.
A fraught issue
Last month, French authorities for the first time brought home five orphaned children of French jihadists from camps in northeast Syria.
According to the UN children's agency UNICEF, around 3,000 foreign children from 43 countries are being kept at the Al-Hol camp in Syria alone, which has taken in most of the people fleeing the defeat and collapse of IS's self-proclaimed “caliphate”.
Up to 1,700 French nationals are thought to have travelled to Iraq and Syria to fight with the IS jihadists between 2014 and 2018, according to government figures. Around 300 are believed to have died in combat.
Kurdish officials have warned they do not have the resources to hold all the captured fighters indefinitely, and Washington is also urging its allies in the anti-IS coalition to take home their citizens.
But repatriation is a politically fraught issue, and governments fear they may not be able to gather enough evidence to convict IS members who claim they did not fight.