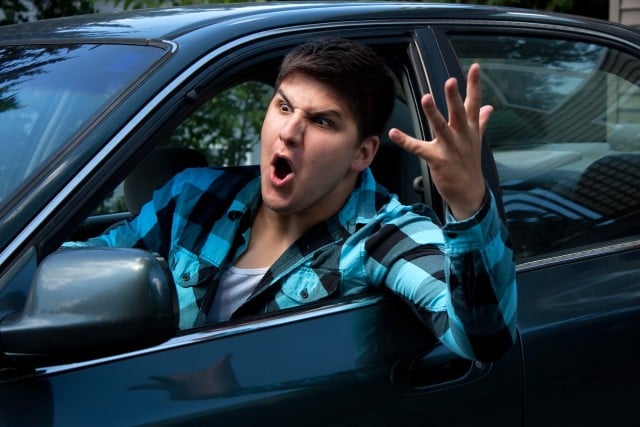 Be prepared for some rage if you drive in France. Arena Creative/Depositphotos

Seven out of 10 French drivers have admitted to screaming insults at other vehicles that annoy them on the road – way above the European average of 56 percent, according to a major inter-European survey of drivers conducted by motorway operators Vinci.

Almost six out of 10 French people admit to honking their horn in frustration, while a third said that they had also overtaken slow-moving traffic on the right on motorways.

The Vinci Foundation's 2019 Responsible Driving Barometer also reveals that the problem is getting worse year on year.

And within France there are some significant regional variations on the level of driver fury.

Topping the rage poll – as will come as no surprise to anyone who has ever attempted to drive round the Arc de Triomphe roundabout – are Parisians. Is Paris traffic the reason for the city's high rage levels. Photo: AFP

Seventy four percent of Parisians admitted to screaming abuse at other drivers, whether with the window up or down, closely followed by the drivers of Marseille and the surrounding Provence-Alpes-Cote d'Azur region at 70 per cent.

By contrast the most mellow French drivers are to be found in Nantes and Strasbourg, where a mere 64 per cent admitted to hurling abuse at fellow road users.

Parisians are also heaviest on the horn, perhaps unsurprisingly given the city's notorious traffic jams, with 70 percent admitting to using their horn in anger.

The more peaceful rural routes of Brittany, however, see just 20 per cent of drivers using their horn to express road rage.

Provence-Alpes-Cote d'Azur – 70 per cent shout, 56 percent use the horn

Bourgogne-Franche-Comté – 70 percent shout, 64 use the horn

The 2019 Responsible Driving Barometer, conducted by Ipsos for the Vinci Motorway Foundation from February 25th to March 13th, interviewed 12,418 people in 11 countries, including a minimum of 1,000 people per country.

Putain – if you want to go the whole hog and join with the tirade of French abuse, you will need this handy word. Find out more about this most versatile of French swearwords here (warning, explicit language).