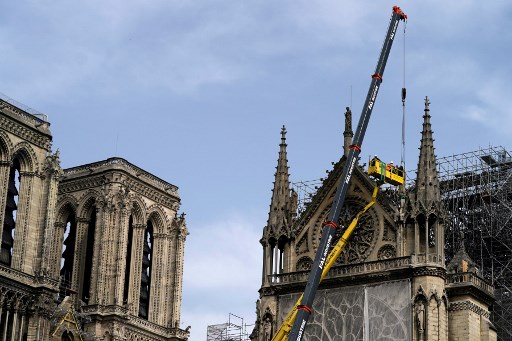 Workers cover one of the Rosette stained-glass windows of Notre Dame. Photo: AFP

The devastating blaze erupted on April 15, felling the spire and destroying two-thirds of its vaulted roof, leaving the 850-year-old Gothic cathedral in fragile condition.

With intense efforts still underway to shore up sections still at risk from collapse, experts faced a new challenge as the national weather service forecast several days of rain.

The risk is that the surviving part of the roof and the famed vaulted ceilings of the architectural masterpiece could suffer further damage, prompting a race to erect a temporary protective cover.

Forecasters expect the rain to begin on Tuesday night, with conditions taking a turn for the worse on Thursday. The blazing steeple of Notre Dame shortly before it collapsed during the April 15 fire. Photo: AFP

“The biggest priority is to protect the cathedral from the coming rain,” the cathedral's chief architect Philippe Villeneuve told France's BFMTV, saying he wanted to “speed up” efforts to erect the tarpaulin before the heavens opened.

“The beams are in place, the tarpaulins have arrived. The climbers and the scaffolders, who will put it up, are ready,” he said.

Christophe Villemain, a specialist in restoring historic buildings, told the channel that the rain could potentially cause further sections of the roof to collapse.

“The rain risks falling on the vaulted ceiling and filling up what we call its haunches, or hollow sections, and that would put the arches at risk of collapse,” he explained.

The covering would only be temporary, with plans to replace it with a more sturdy protective “umbrella” that would remain in place throughout the work to restore Notre-Dame, which took 200 years to build.

Before the umbrella can be set up however, scaffolding that was erected to do renovation work before the fire must first be removed, in an operation which is likely to take up to a month, Villemain said.

Images of the ancient cathedral going up in flames sparked shock and dismay across the globe and in France, where it is considered one of the nation's most beloved landmarks.

Since then, firefighters and engineering experts have been working to erect scaffolding and other wooden supports to stop any of the structure's stonework collapsing.

Notre-Dame has figured as a central character through the ups and downs of French history since construction began in mid-12th century.

During the French Revolution in the 18th century, it was vandalised and plundered but went on to feature as a central character in a Victor Hugo's novel “The Hunchback of Notre-Dame” (1831) which is credited with helping save it.

It survived the devastation of two global conflicts in the 20th century and famously rang its bells on August 24, 1944, the day of the Liberation of Paris from German occupation at the end of the World War II.